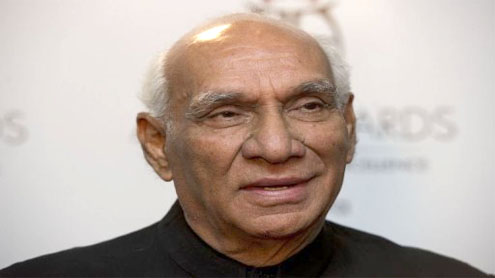 MUMBAI: Veteran film-maker Yash Chopra, known as India’s king of celluloid romance, died on Sunday just weeks after announcing he would not direct any more movies. He was 80.

A Yash Raj Films spokeswoman said Chopra died in the evening. The film-maker had been admitted to a Mumbai hospital last week and was being treated for dengue fever.“I’m in shock and numb, can’t believe the news, the man who immortalised love, Mr. Yash Chopra is no more,” actor Akshay Kumar said on Twitter.Born in 1932 in Lahore, now in Pakistan, Chopra was favoured by leading Indian actors with his movies seen as a sure-fire way to become a hit with audiences.

The film-maker proved his mettle with intensely emotional and tragic movies, many of which went on to become box-office blockbusters.Chopra’s Bollywood career spanned five decades, and at an event marking his 80th birthday last month, Chopra narrated how he came to Mumbai with 200 rupees in his pocket, hoping to make it as a film director.Since then, Chopra made some of Indian cinema’s most memorable films — such as “Deewar”, “Kabhi Kabhie”, “Silsila” and “Chandni”.

His flamboyant style of film-making, movies filmed in exotic locales and mellifluous music became a hallmark, endearing him to filmgoers.Chiffon sarees and the Swiss Alps are so synonymous with Chopra’s style of film-making that Switzerland Tourism even offered visitors a guided tour of the places where the director filmed some of his most famous songs and scenes.Riding on his success, Chopra established Yash Raj Films, one of Bollywood’s biggest production houses, churning out at least three movies a year.

In November, the film studio announced its foray into Hollywood, signing on actors such as Nicole Kidman and Jason Bateman for its overseas productions.Chopra also produced Indian cinema’s longest-running blockbuster, “Dilwale Dulhania Le Jayenge” (1995), which marked the debut of his son Aditya as director.“I have never made romantic films. I have made films on human relations, and humans are complicated people,” he said at the event in September.“Jab Tak Hai Jaan”, with Chopra at the helm for the last time, opens in cinemas in November, eight years after his last project “Veer-Zaara“, a passionate tale of love across borders.The film features Shahrukh Khan, one of Bollywood’s biggest stars, along with Katrina Kaif and Anushka Sharma. – Dawn