Defense of Marriage Act struck down by New York court 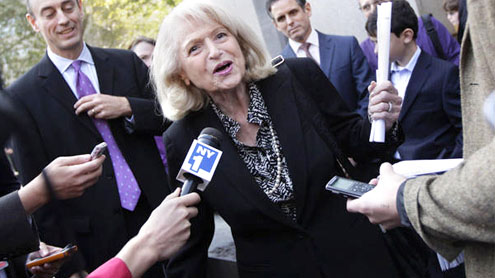 Defense of Marriage Act struck down

A US law defining marriage as being only between one man and one woman has been struck down by a second appeal court, this time in New York.

The 2nd Circuit Court of Appeals ruled 2 to 1 that the Defense of Marriage Act (Doma) is unconstitutional.The act denies legally married gay couples federal benefits including the ability to file joint tax returns.A Boston court unanimously ruled against Doma in May. The Supreme Court is expected to consider it next year.Only it can issue final rulings on whether laws passed by the US Congress are constitutional or not.

In 2011, President Barack Obama instructed the Department of Justice not to defend the law, and earlier this year he announced that he supported the right of gays to marry. Equal protection clause.The New York ruling came in a case brought by Edith Windsor, who sued the government in 2010 after being told to pay $363,053 (£224,940) in federal estate tax after her wife died.The couple had been partners for 44 years and had married in Canada in 2007.

The majority opinion, written by Judge Dennis Jacobs, said that Doma’s “classification of same-sex spouses was not substantially related to an important government interest” and therefore violated the equal protection clause of the US Constitution.Doma touches more than 1,000 federal laws, Judge Jacobs said, arguing that “homosexuals are not in a position to adequately protect themselves from the discriminatory wishes of the majoritarian public”.He also rejected arguments that the definition of marriage was traditional.

“Even if preserving tradition were in itself an important goal, Doma is not a means to achieve it.”In his dissent, Judge Chester Straub said that the government could only change its understanding of marriage if the American people instructed them to do so through legislation.

“Courts should not intervene where there is a robust political debate because doing so poisons the political well, imposing a destructive anti-majoritarian constitutional ruling on a vigorous debate,” he said.The decision came less than a month after the court heard arguments on 27 September.The Supreme Court is expected to take up a case on Doma as well as an ongoing legal wrangle over a gay marriage ban in the state of California, a law known as Proposition 8. – BBC