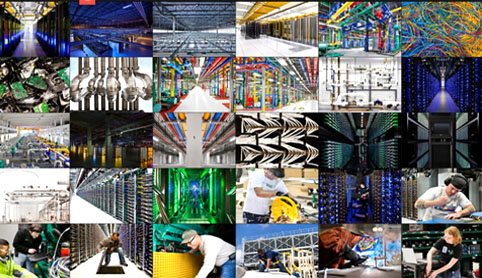 Google has given a rare glimpse inside the vast data centres around the globe that power its services.

They reveal an intricate maze of computers that process Internet search requests, show YouTube video clips and distribute email for millions of people.With hundreds of thousands of servers, colourful cables and even bicycles so engineers can get around quickly, they range from a converted paper mill in Finland to custom made server farms in Iowa.

‘Very few people have stepped inside Google’s data centers, and for good reason: our first priority is the privacy and security of your data, and we go to great lengths to protect it, keeping our sites under close guard,’ the firm said.

‘While we’ve shared many of our designs and best practices, and we’ve been publishing our efficiency data since 2008, only a small set of employees have access to the server floor itself.’Today, for the first time, you can see inside our data centers and pay them a virtual visit.’

On Where the Internet lives, our new site featuring beautiful photographs by Connie Zhou, you’ll get a never-before-seen look at the technology, the people and the places that keep Google running.’The site features photos from inside some of the eight data centers that Google Inc. already has running in the U.S., Finland and Belgium.

Google is also building data centers in Hong Kong, Taiwan, Singapore and Chile.Virtual tours of a North Carolina data center also will be available through Google’s ‘Street View’ service, which is usually used to view photos of neighborhoods around the world.The photographic access to Google’s data centers coincides with the publication of a Wired magazine article about how the company builds and operates them.

The article is written by Steven Levy, a journalist who won Google’s trust while writing ‘In The Plex,’ a book published last year about the company’s philosophy and evolution.The data centers represent Google’s nerve center, although none are located near the company’s headquarters in Mountain View, Calif.

As Google blossomed from its roots in a Silicon Valley garage, company co-founders Larry Page and Sergey Brin worked with other engineers to develop a system to connect low-cost computer servers in a way that would help them realize their ambition to provide a digital roadmap to all of the world’s information.

Initially, Google just wanted enough computing power to index all the websites on the Internet and deliver quick responses to search requests. As Google’s tentacles extended into other markets, the company had to keep adding more computers to store videos, photos, email and information about their users’ preferences.

The insights that Google gathers about the more than 1 billion people that use its services has made the company a frequent target of privacy complaints around the world.The latest missive came Tuesday in Europe, where regulators told Google to revise a 7-month-old change to its privacy policy that enables the company to combine user data collected from its different services.

Google studies Internet search requests and Web surfing habits in an effort to gain a better understanding of what people like. The company does this in an effort to show ads of products and services to the people most likely to be interested in buying them. Advertising accounts for virtually all of Google’s revenue, which totaled nearly $23 billion through the first half of this year.

Even as it allows anyone with a Web browser to peer into its data centers, Google intends to closely guard physical access to its buildings. The company also remains cagey about how many computers are in its data centers, saying only that they house hundreds of thousands of machines to run Google’s services.Google’s need for so many computers has turned the company a major electricity user, although management says it’s constantly looking for ways to reduce power consumption to protect the environment and lower its expenses. – Dailymails