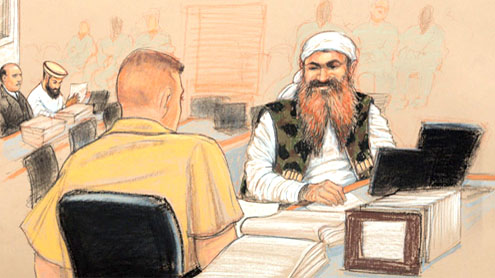 US NAVAL BASE AT GUANTANAMO BAY: Wearing a military-style vest, self-declared 9/11 mastermind Khalid Sheikh Mohammed delivered a scathing anti-American diatribe at a military tribunal on Wednesday in what the judge called a “one-time occurrence.”

The US president “can legislate assassinations under the name of national security for American citizens,” the Kuwaiti-born Pakistani said during the third day of a pre-trial hearing at the US naval base in Guantanamo Bay, Cuba.Often considered a provocateur, Sheik Mohammed — known by his initials KSM — was allowed to speak with a 40-second time delay that would have enabled his comments to be censored had he touched on sensitive issues.Sheikh Mohammed was detained in a secret CIA prison from 2002 to 2006, and the government has acknowledged that he was subjected to waterboarding 183 times.

“The president can take someone and throw him under the sea under the name of national security,” he said in an apparent reference to al Qaeda chief Osama bin Laden killed by the United States in Pakistan a year ago.Donning a thick beard dyed with henna and a white turban, Sheikh Mohammed, who was regarded as one of bin Laden’s most trusted and intelligent lieutenants, concluded with “our blood is not made of water.”Following his diatribe, Judge James Pohl alerted him that he would not be allowed to speak again.

“I didn’t interrupt you … this is a one-time occurrence” Pohl said.The hearings are in preparation for a 9/11 trial to be held at some point next year.Sheikh Mohammed is accused of orchestrating the hijacked airliner plot that left 2,976 people dead, while his alleged al Qaeda accomplices are charged with providing funding and other support for those who crashed the planes.All five face the death penalty if convicted.

In addition to felling the Twin Towers, the trained engineer claims to have beheaded US journalist Daniel Pearl in 2002 with his “blessed right hand,” and to have helped in the 1993 World Trade Center bombing that killed six.Sheikh Mohammed, who considers himself a prisoner of war, appeared Wednesday wearing a military-style camouflage vest over a white tunic.The prosecution has dubbed the defendants “unlawful combatants,” and sought to deny them the right to military-style clothing on security grounds, but Pohl dismissed this concern.

Sheikh Mohammed and the other defendants also have the right to stay in their cells and not attend the hearings.KSM had planned to attend Wednesday, then asked to be taken back to his cell, only to change his mind again and appear at the hearing, the judge said.In the end, Sheikh Mohammed showed up during a break in the proceedings.

During the five-day pre-trial hearing which runs through Friday, the defense is seeking to prevent President Barack Obama’s administration from arguing that the treatment and alleged torture of the defendants during interrogations in secret CIA prisons before being sent to Guantanamo in 2006 is classified for national security.A portion of Wednesday’s exchanges were blurred when when a lawyer made a “specific reference to a classified hypothetical interrogation technique,” the judge explained when the transmission resumed.

“If I beat you, I’m not providing you information, if I chain you to the ceiling, I’m not providing you information,” said the lawyer in question, Kevin Bogucki, saying that only information and not a memory or an experience can be classified.During this exchange, Sheikh Mohammed leaned toward co-defendant Ammar al-Baluchi, and, after addressing him from a distance, raised his hand to request in a request to speak. – Dawn