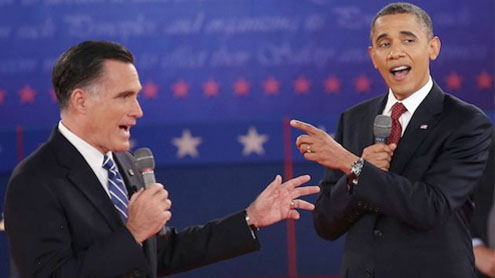 A much more aggressive President Barack Obama showed up to the second presidential debate Tuesday, which at times devolved into angry crosstalk with Republican rival Mitt Romney.

President Obama was under pressure to perform dramatically better at this debate—held at Hofstra University in Long Island, N.Y.—than the one held two weeks ago. Gov. Romney’s energetic performance at that first debate quickly boosted him in the polls, with some recent measures showing he and the president in a virtual tie among likely voters.

Romney kept up his Denver demeanor, attacking Obama on his jobs record, failure to pass immigration reform, policies in the Middle East, and other issues. But this time, instead of simply repeating portions of his stump speech, Obama was ready with specific retorts and counter-attacks. The president frequently accused Romney of twisting facts, occasionally interrupting him as he spoke.

At one point, the debate almost became a shouting match over whether President Obama had cut back oil extraction from public lands. Obama repeatedly said Romney was lying about his claim that oil production was down, pointedly saying, “Not true, Governor Romney.” (Politifact ranked a similar claim by a conservative super PAC “half true.”) Feeling the heat, moderator Candy Crowley took the candidates to another topic.The 90-minute town hall-style debate got personal at times. Romney took a detour on an answer on immigration reform to address Obama campaign claims that his personal fortune is invested in China and shielded from taxes.

“Mr. President, have you looked at your pension?” he asked, implying the president is also unaware of the nature of his investments. “You know, I don’t look at my pension,” Obama retorted, adding, “It’s not as big as yours so it doesn’t take as long.”Obama returned more than once to the topic of Romney’s wealth, saying Romney sees nothing unfair about millionaires paying the same tax rate as a nurse or other middle-class worker.

Later in the debate, Romney criticized Obama for attending political events so soon after the U.S. ambassador to Libya, Chris Stevens, was killed, and also said Obama’s campaign unfairly painted him as a villain. Obama closed the debate by mentioning Romney’s leaked comments that half the country is dependent on government.

Both candidates appeared comfortable with the more intimate town hall-style, during which an audience of 80 undecided voters, handpicked by polling organization Gallup, watched and asked questions. Audience members picked by Crowley asked the candidates about immigration reform, jobs, gun control, the gender pay gap, and other issues. In answer to a question about the economy from college student Jeremy Epstein, Romney said if elected he could guarantee Epstein would find employment when he graduates in 2014 because of his economic policies.

“I’m going to make sure you get a job,” Romney said. Obama answered a question about the pay gap with a personal story about his mother’s struggle to make ends meet while raising two children on her own.By the end of the debate, Romney spoke for nearly 41 minutes, Obama a little over 44 minutes.The final debate of the election is Monday in Boca Raton, Florida, and will focus on foreign policy. – Yahoonews