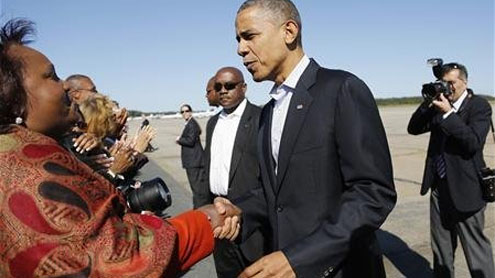 WILLIAMSBURG, Virginia: President Barack Obama said on Sunday his debate preparation was “going great” and aides said the Democrat would be more aggressive in his next face off with Mitt Romney after their last encounter gave the Republican challenger a boost.

Since that first debate in Denver on October 3, polls indicate Romney has erased Obama’s lead heading into the November 6 election. Obama and Romney debate again on Tuesday at Hofstra University in Hempstead, New York. The third and final presidential debate will take place on October 22 in Florida. Obama is spending the days ahead of the second debate at a resort in Williamsburg, Virginia, a battleground state that both candidates want to win in order to be victorious on November 6.

During a quick stop at a local campaign office, where he delivered pizzas to volunteers and called supporters by phone, Obama had an enthusiastic take on his practice sessions.”It is going great,” Obama told reporters.Before his debate in Denver, Obama held a similar “debate camp” in the swing state of Nevada. During a visit to a campaign office there, he called the practice sessions “a drag.”

That attitude may have shown through on stage. His performance was widely panned as passive, and Romney’s energetic showing gave his campaign a significant lift.”The president is his own harshest critic and he knows Mitt Romney had a better night at the first debate,” campaign spokeswoman Jen Psaki said on Sunday.”The American people should expect to see a much more energized President Obama making a passionate case for why he is a better choice for the middle class.”Obama started debate preparation around 10 a.m. on Sunday before breaking for the campaign office stop. He joked with volunteers that he was able to use the traditional landline phones because he had them at home.

“We actually still have old style phones…at the White House,” he said.On Sunday’s talk shows, Obama’s advisers said he was preparing for a stepped-up performance, but the Romney team sounded unimpressed.”Well, the president can change his style. He can change his tactics. He can’t change his record. And he can’t change his policies. And that’s what this election is about,” Romney campaign adviser Ed Gillespie told CNN.”I think the race is very close. I think the wind is at Governor Romney’s back, and there’s clearly momentum. You can see it on the trail, you can see it in the data,” Gillespie said in a separate appearance on “Fox News Sunday.”

Obama’s chief campaign strategist David Axelrod told the “Fox News Sunday” program the president would be aggressive in making his case on Tuesday.”But the other thing he’s going to certainly do – I mean, we saw Governor Romney sort of serially walk away from his own proposals – certainly the president is going to be willing to challenge him on it as we saw the vice president challenge Paul Ryan,” Axelrod said.