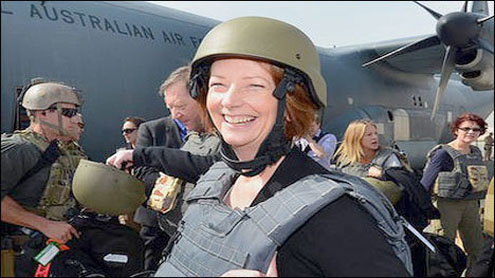 KABUL: Australian Prime Minister Julia Gillard has made a surprise visit to Afghanistan, seeking assurances from President Hamid Karzai that he is doing all he can to halt “insider attacks”.

Gillard met the Afghan leader on Sunday in Kabul while also visiting Australian troops for a barbecue at their base at Tarin Kowt, her office said.She raised concerns about the so-called green-on-blue attacks in which uniformed Afghans turn their weapons against their international allies.NATO has struggled to counter them and assaults have spiked this year.

“I spoke to President Karzai about our concern about insider attacks and sought an assurance from him that everything that can be done is being done,” she told reporters.”He spoke to me about the steps being taken by Afghan forces to deal with insider attacks. I also raised that issue with the Governor of Uruzgan province where our troops were.”Clearly these have been tragic and disturbing incidents,” she added.”They are designed to corrode morale and everything needs to be done on the Afghan side to deal with the possibility of insider attacks, and so I spoke about that.”

On August 30, Australia suffered its deadliest day in combat since the Vietnam War when five troops were killed in two separate incidents in Afghanistan.The deaths included three killings in an “insider attack” by an Afghan solider and brought to 38 the number of Australian lives lost in the conflict.Gillard has previously admitted the spate of “insider attacks” was making it difficult to build trust between Australians and the Afghans they are training.

Australia is a close ally of the United States and its Afghan deployment began in 2001. It announced this year that it would begin withdrawing its forces in 2013, earlier than planned due to significant security gains.Gillard made the stopover after attending 10th anniversary commemorations for the Bali bombings in Indonesia, in which 88 Australians died. – Thenews