US running mates clash in debate 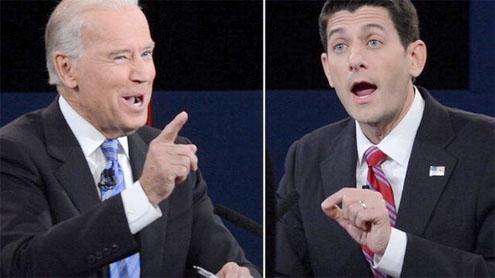 US vice-presidential candidates Joe Biden and Paul Ryan have clashed sharply in their only debate, as polls show a tightening campaign.

Thursday night’s debate saw feisty exchanges on national security, the economy, taxes and healthcare.Mr Biden, a Democrat, was aggressive, frequently interrupting his rival as he defended President Barack Obama.Mr Ryan, a Republican Wisconsin congressman, was comparatively calm in his first debate on the national stage.The head-to-head came as Democrats try to rejuvenate their campaign after what was widely seen as a poor debate performance by Mr Obama last week.

The Republican challenger, former Massachusetts governor and businessman Mitt Romney, has gained steadily in the polls as a result.The president has acknowledged he was “too polite”, and it appeared his campaign unleashed Mr Biden on Thursday night to attack Mr Romney on taxes, government spending, the economy and other issues.The vice-president repeatedly cut off Mr Ryan, chuckling, rolling his eyes and raising his hands in apparent exasperation, even as he referred to his rival as “my friend”.

But Mr Ryan seemed not to be rattled. His goal was to defend Mr Romney’s recent gains against a renewed onslaught from Mr Obama, analysts said.On stage at Centre College in Kentucky, the vice-presidential candidates jousted as moderator Martha Raddatz of ABC News sought to keep order.The debate opened with an exchange on Libya, where a US ambassador was killed last month in what the Obama administration now calls a terrorist attack.

Mr Biden defended the Obama administration’s handling of the situation, as well as its initially inaccurate characterisation of the incident as a reaction to an anti-Islamic video made in the US.And he pivoted to attack Mr Romney, saying the Republican’s decision to hold a political press conference the morning after the attack was “not presidential leadership”.In one of many barbs, he said Mr Ryan’s criticisms of the administration’s handling of the crisis were “a bunch of malarkey. Not a single thing he said is accurate”.

Mr Ryan, meanwhile, said the administration had disregarded diplomats’ requests for more security in Libya.And in a charge he repeated later, Mr Ryan said: “What we are watching on our TV screens is the unravelling of the Obama foreign policy.”The men argued about Iran and the US relationship with Israel, but showed little substantive difference between their tickets’ respective policies.

“When Barack Obama was elected, [Iran] had enough fissile material – nuclear material to make one bomb,” Mr Ryan said. “Now they have enough for five.”Mr Biden said international sanctions against Iran had crippled that nation’s economy, and challenged Mr Ryan to clarify where Republican policy on Iran differs from the administration’s.”So all this bluster I keep hearing, all this loose talk, what are they talking about?” he asked.On the economy, Mr Biden said the president had inherited a nation teetering on ruin – a result, he said repeatedly, of the Republican policies of George W Bush.

And he defended the president’s remedies, especially a programme – that Mr Romney opposed – to save US auto manufacturers from bankruptcy.”We knew we had to act for the middle class,” Mr Biden said. “We immediately went out and rescued General Motors.He added: “What did Romney do? Romney said, ‘No, let Detroit go bankrupt.'”Mr Biden also unleashed a broadside against Mr Romney’s recently publicised comments that the 47% of Americans who pay no federal income tax are dependent on government, consider themselves victims, and should take responsibility for themselves.

“I’ve never met two guys who are more down on America across the board,” he said, referring to Mr Romney and Mr Ryan.Mr Ryan sought to deflect the attack with a story about Mr Romney’s personal generosity and by referring to Mr Biden’s own record of verbal blunders. He acknowledged Mr Obama had inherited an economy near collapse, but added: “We’re going in the wrong direction.”He noted the continuing high unemployment rate and other grim statistics.

“This is not what a real recovery looks like,” the congressman said, promising that Mr Romney’s tax plans would add jobs and promote economic growth.Later, the two outlined their competing plans on the Medicare healthcare programme for over-65s.Mr Biden defended the administration’s 2010 health insurance overhaul, dubbed Obamacare; Mr Ryan derided it as a government takeover of the healthcare industry and repeated a disputed assertion that Mr Obama had pulled money from Medicare in order to fund it.

With the election less than four weeks away, the rivals were tasked with keeping their respective campaigns competitive, as new polls suggest Mr Romney has narrowed or erased Mr Obama’s lead in several key swing states.The two candidates are virtually tied in Florida and Virginia while Mr Obama still leads in Ohio, but by a slimmer margin. – BBC