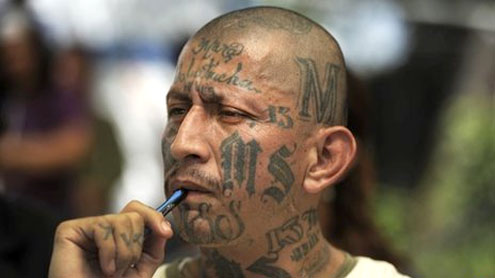 The United States Treasury has designated a violent gang set up by El Salvador immigrants in the Los Angeles area as a “transnational criminal organisation”.

The move allows the authorities to seize assets from the MS-13 gang.The group makes millions of dollars in profits from drug-trafficking and other criminal activities.MS-13 has thousands of members across the US, Canada, Mexico and Central America.The US authorities say the sanction makes it illegal for American citizens and banks to do any business with them. Much of the money generated by the gang is sent back to El Salvador, where its leadership is based.

“This designation allows us to strike at the heart of MS-13,” Immigration and Customs Enforcement Director John Morton told the AP news agency.MS-13 is “one of the most dangerous and rapidly expanding criminal gangs in the world today,” says a US treasury statement.It has 30,000 members, adds the statement, with members involved in murder, racketeering, drug- and sex -rafficking from Alaska and Canada in the north all the way down to Central America.

“MS-13’s criminal nature can be seen in one of its mottos, ‘Mata, roba, viola, controla’, or ‘kill, steal, rape, control’,” says the statement.In one of the most gruesome murders carried out by the gang on American soil, a pregnant Virginia teenager was stabbed to death in 2003 after she became a police informant.Thousands of MS-13 members have been arrested in the US this year. MS-13, or Mara Salvatrucha, was created in the 1980s in Los Angeles by poor mostly illegal immigrants who had escaped from the civil war in El Salvador.

When the conflict ended, with a peace treaty signed in 1992, many were expelled and deported to their country – or their parents’ country in many cases.They took back to Central America LA’s gang culture.MS-13’s main rivals are the Barrio 18 gang, also founded by Salvadorean immigrants in Los Angeles.In March they agreed to a cease-fire, mediated by the Catholic Church, which has sharply reduced the number of murders in the country.

Salvadorean gangs have also got involved in drug trafficking.They became allies, or in some cases enemies, of Mexico’s powerful drug cartels, such as the Zetas and the Sinaloa Cartel.MS-13 members, known as ‘maras’ or ‘mareros’, cover their bodies with tattoos and use hand signs to identify each other.Gang members are also in control of most Salvadorean prisons. – BBC

US running mates clash in debate