Obama has failed to lead in Syria: Romney 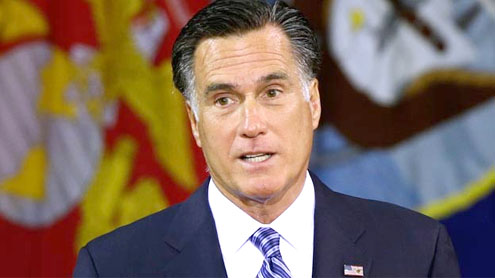 Obama has failed to lead in Syria: Romney

LEXINGTON: US President Barack Obama has “failed to lead in Syria,” and the strains between his administration and chief regional ally Israel are emboldening Iran, White House hopeful Mitt Romney warned Monday.

Making the case in a major foreign policy speech that the United States and the Middle East are less safe now than they were at the start of Obama’s term, Romney said the president’s dithering had increased the threat of instability in a region clamoring for US leadership.“The president has failed to lead in Syria, where more than 30,000 men, women and children have been massacred by the Assad regime over the past 20 months,” and rebels do not have the necessary weapons to battle President Bashar al-Assad’s troops, Romney said at the Virginia Military Institute.

“Our ally Turkey has been attacked. And the conflict threatens stability in the region,” the Republican nominee said.Laying out his foreign policy platform less than a month before the November 6 election, Romney acknowledged that Obama had taken some key steps, notably the elimination of chief terror suspect Osama bin Laden last year.“But when we look at the Middle East today, with Iran closer than ever to nuclear weapons capability, with the conflict in Syria threatening to destabilize the region, with violent extremists on the march, and with an American ambassador and three others dead likely at the hands of al Qaeda affiliates, it is clear that the risk of conflict in the region is higher now than when the president took office,” he said.

Romney warned that Obama’s poor handling of Syria is emblematic of a president that opts to “lead from behind” instead of asserting US influence on the region.He attacked Obama for “sitting on the sidelines” on the prickly issue of the Syrian rebels, and said it was vital to help arm the rebels that are battling Damascus.“In Syria, I will work with our partners to identify and organize those members of the opposition who share our values and ensure they obtain the arms they need to defeat Assad’s tanks, helicopters, and fighter jets,” Romney said.“It is essential that we develop influence with those forces in Syria that will one day lead a country that sits at the heart of the Middle East.” – Dawn

Delhi Golf Team and the Together we Golf Team