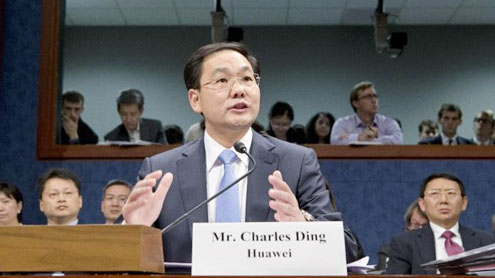 The panel said in a report that U.S. regulators should block mergers and acquisitions in this country by Huawei Technologies Ltd. and ZTE Corp, among the world’s leading suppliers of telecommunications gear and mobile phones.Reflecting U.S. concern over cyber-attacks traced to China, the report also recommends that U.S. government computer systems not include any components from the two firms because that could pose an espionage risk.

“China is known to be the major perpetrator of cyber-espionage, and Huawei and ZTE failed to alleviate serious concerns throughout this important investigation. American businesses should use other vendors,” the committee’s chairman, Rep. Mike Rogers, R-Mich, told a news conference. He said the Chinese companies could not be trusted with access to computer networks that support everything from power grids to finance systems.

The recommendations are the result of a yearlong probe, including a congressional hearing last month in which senior Chinese executives of both companies denied posing a security threat and being under Beijing’s influence. – Yahoonews