Abu Hamza extradited to US 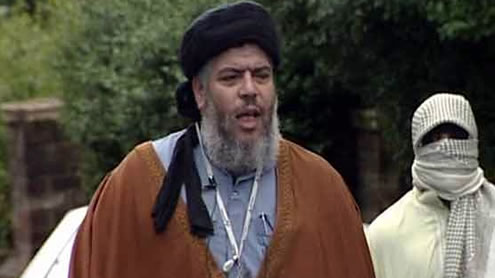 Radical Islamist preacher Abu Hamza and four other terror suspects have finally been deported from Britain to the United States, Home Secretary Theresa May said Saturday.

The Egyptian-born former imam was flown out of a military airbase following a legal saga that ended Friday after dragging on for more than a decade in the courts of Britain and Europe. Two senior judges at the High Court in London dismissed the men s pleas to be allowed a stay of extradition, and, within hours, they were whisked from prison to a Royal Air Force base in eastern England used by the US military. “I can confirm that tonight two planes have left RAF Mildenhall”, taking the suspects “to the US to face trial”, interior minister May said in a statement. The planes took off shortly before midnight (2300 GMT), carrying Abu Hamza and fellow suspects Khaled Al-Fawwaz, Syed Tahla Ahsan, Adel Abdul Bary and Babar Ahmad.

“I am pleased the decision of the court meant that these men, who used every available opportunity to frustrate and delay the extradition process over many years, could finally be removed. “This government has co-operated fully with the courts and pressed at every stage to ensure this happened. “We have worked tirelessly, alongside the US authorities, the police and the prison service, to put plans in place so that tonight these men could be handed over within hours of the court s decision. “It is right that these men, who are all accused of very serious offences, will finally face justice.”

Abu Hamza has been indicted in the United States on charges including setting up an Al-Qaeda-style training camp for militants in the state of Oregon and involvement in the taking of 16 hostages in Yemen in 1998. The 54-year-old Egyptian-born former imam, who has a hook for his right hand, failed to convince the judges that his extradition should be blocked in order for medical tests to be carried out for his depression. – Dunyanews

From Russia with Love

From Russia with Love