Sefton’s rider kills his children, then himself 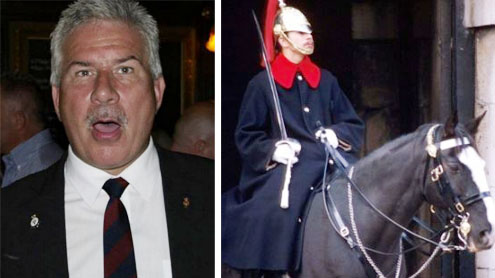 Sefton's rider kills his children, then himself

A father blown up in the Hyde Park IRA bombing stabbed himself and his two young children to death on a country lane.

Michael Pedersen rode the cavalry horse Sefton to the Changing of the Guard ceremony which ended in carnage 30 years ago.Mr Pedersen, his seven-year-old son Ben and daughter Freya, six, were discovered side-by-side close to the family car near a remote bridle path. Both children had been stabbed, police said.Mr Pedersen is believed to have then stabbed himself with the same knife.Police said yesterday that they were not looking for anyone else in connection with the deaths.

The 51-year-old father-of-four is said to have been involved in an angry break-up from the children’s mother, Erica, just weeks ago.Neighbours claimed Mr Pedersen had been thrown out of the family home in Ashford, Surrey, following a furious row after he saw his wife of ten years kissing another man at a party.The youngsters had been spending the weekend with their father on a visit to their grandfather.

Detectives were alerted to the horrific scene at Newton Stacey, near Andover, Hampshire, at around 6.15pm on Sunday by a woman walking her dogs.She reported seeing bodies lying near a Saab 900 SE convertible that had its doors and boot open.Mrs Pedersen, 43, who had previously complained about her husband’s behaviour, is said to have called police when he did not bring the children home.The former Household Cavalry soldier made international headlines on July 20, 1982, when he was a sergeant, riding on his horse Sefton.

While the pair were en route to the Changing of the Guard with 15 other horses of the Blues and Royals regiment, a car-mounted nail bomb planted by the IRA detonated on South Carriage Drive in Hyde Park.The blast killed several soldiers and horses. Sefton suffered serious injuries but the horse’s remarkable recovery led to him becoming a favourite with the British public.Since leaving the Army, Mr Pedersen has had a number of jobs and had recently been driving a lorry.The curtains were drawn firmly shut at the family’s £310,000 two-storey, red-brick terrace home yesterday, but neighbours spoke of Mrs Pedersen’s ‘devastation’.

The driving instructor had also worked as a company secretary with her husband, who was director of Highroad Logistics SE Ltd. They have run a number of small businesses together.Her father William Clifford, 67, said: ‘We are obviously devastated. What we would ask is that you respect our privacy in this matter.‘It is extremely distressing and that is all I want to say.’One neighbour, who declined to be named, said of Mr Pedersen: ‘He had split up from his wife only around three weeks ago. She had a bit too much to drink and she kissed another bloke and Mick saw.

‘He got a bit angry about it and the next thing you knew they had split up. I think that the police had some type of order out on him and he wasn’t allowed to go within 500 yards of the home. I’m not sure why.‘He loved his kids. You would never have thought he would do something like this.’

Another neighbour said: ‘He was known as a gentle giant around here. He was an open man, he would help anybody out if they had a problem.‘I last saw Erica on Sunday evening, she was washing the car and shouting at somebody down the phone. This is all just such a shock.’She said of Freya and Ben: ‘They were lovely children. They were always outside playing with their dogs, smiling and laughing.’In a Facebook message posted in August, Mr Pedersen wrote that he had experienced the ‘worst day of my life’ after splitting from his wife.He wrote that he was ‘absolutely distraught’ and apologised to his friends, adding: ‘Sorry everyone.’

In the message, he suggested that the couple had a ‘few problems’, but ‘none insurmountable’.He also wrote: ‘Can’t believe I am supposed to have pushed her at the weekend – too untrue for words.Still love her very much and would give anything to turn the clock back and try to make things different.’He added: ‘Both parties need to give their all to make the wonderful institution of marriage work (and sometimes more).‘Inappropriate behaviour is not required… love the partner you are with completely. Sorry everyone.’

The message attracted messages of sympathy from one of Mr Pedersen’s Facebook friends, who wrote ‘Chin up, mate’.Several old Army colleagues also offered their support. One wrote: ‘Bloody hell!! Sorry mate, you know your squaddie buddies will be there for you if you need help!’Twice-married Mr Pedersen was said by neighbours to have been staying with his son from his first marriage, David, in Chertsey, Surrey, for the past few weeks. David Pedersen declined to comment yesterday.

Detective Superintendent Tony Harris, of Hampshire Police, said: ‘We are currently investigating the circumstances surrounding this terrible incident and are working to establish what has led to these tragic deaths.’Mr Harris said that Surrey Police were considering referring the case to the Independent Police Complaints Commission because officers had had some previous contact with Mrs Pedersen’s case. – Dailymail