British court halts extradition of Abu Hamza to the U.S. 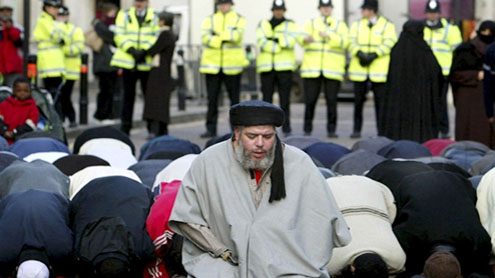 Extradition of Abu Hamza to the US

A British high court judge on Wednesday halted the extradition of Abu Hamza al-Masri to the United States after the radical Islamist preacher lodged a last-ditch legal appeal, the Judiciary Office said, according to AFP.

The judge issued “interim injunctions” barring the removal of Abu Hamza and a second terror suspect, Khaled al-Fawwaz, pending a hearing in open court which will happen “urgently,” a spokeswoman said.The European Court of Human Rights (ECHR) on Monday upheld an April 10 ruling that it made approving the extradition from Britain of Hamza, Fawwaz and three other suspects to the United States.

Al-Masri, 54, could face a sentence of over 100 years in an ultra-secure “Supermax” prison, and had argued that such treatment would contravene Article 3 of the European Convention on Human Rights, which prohibits inhumane and degrading treatment.Today the Grand Chamber decided to reject the request. This means that the Chamber judgment of April 10, 2012, is now final,” the ECHR said in a statement.

The decision also concerned appeals lodged by four other defendants, Babar Ahmad, Syed Tahla Ahsan, Adel Abdul Bary and Khaled Al-Fawwaz, all of whom have been detained in Britain pending extradition to the United States.Al-Masri is one of the most radical Islamists in Britain, where he was once a preacher at a North London mosque but was later convicted of inciting murder and racial hatred. He is being held in a British jail.He was indicted in 2004 by a federal grand jury in New York, accused of providing material support to al-Qaeda and of involvement in a hostage taking in Yemen in 1998 in which four hostages were killed. – Alarabiya