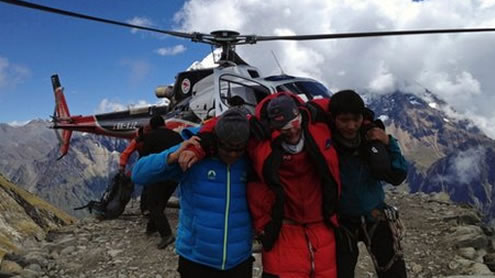 At least nine climbers including a German and a local guide have been killed in Nepal after they were buried by an avalanche on one of the world’s most deadly mountains, officials said Sunday.

The group of French, Germans and Italians were near the top of Manaslu ahead of a final push to the 8,156-metre (26,759 feet) summit when they were hit by a wall of snow on Saturday night, police said. ‘Nine bodies have been recovered from the mountain that includes one Sherpa guide and a German mountaineer,’ Basanta Bahadur Kunwar, the local deputy superintendent of police, told AFP by telephone. ‘We are yet to identify the nationalities of seven dead mountaineers whose bodies are still at the base camp,’ he said.

‘So far, 13 people have been rescued alive, of whom five have been airlifted to Kathmandu for treatment,’ he added. The group was thought to have more than 20 members. He said the eight other injured climbers were stuck at base camp because rescue helicopters could not fly due to poor visibility and bad weather. Officials were trying to confirm the exact size of the expedition and whether some climbers were still missing.

Manaslu, the eighth highest mountain in the world, is considered one of the most dangerous, with scores of deaths in recent years and just a few hundred successful ascents. ‘The avalanche hit camp three of the Manaslu peak located at 7,000 metres resulting in a flood of snow,’ said Laxmi Dhakal, head of the home ministry’s disaster response division. Nepal is home to eight of the world’s 14 peaks over 8,000 metres, including the world’s highest, Mount Everest, and attracts thousands of mountaineers every year. Most come in the spring, when Himalayan conditions are at their best, but there is also a short climbing season in late September and October after the monsoon rains end. – Khaleejtimes