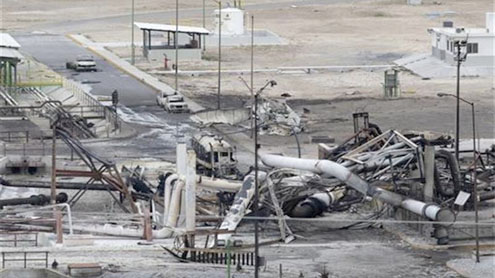 Mexican President Felipe Calderon has ordered a thorough investigation into an explosion at a gas plant which killed 26 people on Tuesday.

Officials said seven people were still missing after the explosion.Mr Calderon said the quick reaction of emergency workers had prevented “a real catastrophe”.State oil company Pemex said preliminary investigations suggested that the blast near the town of Reynosa had been caused by a build-up of gas.Pemex Director Juan Jose Suarez said that there was “no evidence that it was a deliberate incident, or some kind of attack”.

Mr Suarez said that all evidence pointed to “an unusual accident”.’Pemex official Carlos Morales said that maintenance work had been carried out on the plant just minutes prior to the explosion.Mr Morales said that a build-up of gas had set off an explosion, which had triggered the blaze which tore through the gas storage facility near the border with the United States.

The cause of the gas-build up would be investigated, Mr Morales said.President Calderon praised the emergency workers, who he said had managed to contain the fire before it could spread to the massive tanks of a neighbouring gas processing plant.One worker described how the explosion had caused the ground around the gas plant to shake.

Twenty-six people were killed in the accident, 46 were injured, and seven remain missing.There have been several fires at Mexican refineries over the past month.While investigations into those blazes have not yet concluded, preliminary evidence suggests they could have been caused by thieves tapping the lines to steal petrol. – BBC