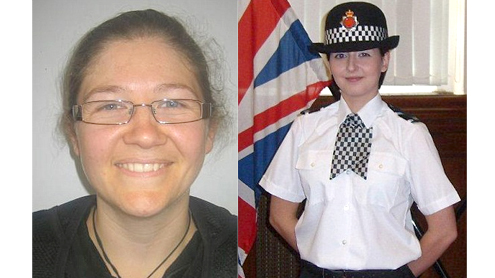 For the two unarmed policewomen it was a routine call to a suspected burglary.But, half an hour later, Fiona Bone, 32, and Nicola Hughes, 23, were gunned down in an act of ‘despicable evil’.

The story of the break-in was apparently a fabrication and lying in wait was a killer.He cut the constables down in a hail of bullets before tossing a grenade at them.Miss Bone, who was engaged to marry, died at the scene and rookie Miss Hughes a short time later from catastrophic injuries.They are the first woman police officers to be killed together on duty.Shortly after the shootings, Dale Cregan – wanted over a double killing – went to a police station and was arrested on suspicion of murder.The chief constable of Greater Manchester Police could not contain his fury about the loss of two of his officers.

‘This is one of the darkest days in the history of the Greater Manchester Police if not for the police service overall, because we have lost two deeply loved and valued colleagues,’ said Sir Peter Fahy at a sombre press conference.‘It would appear the killer has deliberately done this in an act of cold-blooded murder.’Ian Hanson of the city’s Police Federation called the deaths ‘the slaughter of the innocents’.

And David Cameron said the killings were ‘a shocking reminder of the debt we owe to those who put themselves in danger to keep us safe and secure – what we have seen is the absolutely despicable act of pure evil’.Last night, details emerged about 29-year-old Cregan’s background and the countdown to yesterday’s horror.Last night colleagues issued statements, paying tribute to the fallen officers.

Miss Bone’s colleagues said she ‘had a great sense of humour, always enjoying a good laugh’.‘She was an excellent bobby and cared about her job and the community she served,’ they added.Miss Hughes’s colleagues called her ‘a chatterbox’ who always smiling, even after a night shift when everyone else was a bit grumpy.’ ‘She was a good listener and couldn’t do enough for people, she was a lovely friend and a great bobby.”The double tragedy unfolded after police received a phone call at 10am saying a burglary had taken place at an address in Abbey Gardens in Hattersley.

Miss Bone, an officer with five years of service, and her less experienced colleague Miss Hughes, drove to the 1960s semi-detached property. Once they arrived at around 11am they got out of the patrol car and began to make their way to the house where they were ambushed.But such was the ferocity of the attack, the two officers, who were wearing standard issue body armour, stood no chance. Sir Peter said the killer emerged from inside or near the property armed with a gun and a grenade.The killer is thought to have shot Miss Bone in the head at point blank range before spraying bullets at her colleague, who fell to the ground.

The gunman then threw a grenade which exploded sending shrapnel flying across the front of the house. Moments later he was seen calmly walking down the street, carrying a rucksack.The suspect is then believed to have jumped into a BMW, which was waiting nearby, and whisked off by a female driver.Panicked residents immediately called emergency services and paramedics battled to save Miss Hughes, who had suffered catastrophic injuries.They could be seen given heart compression as she lay on the ground before she was rushed to Tameside Hospital where doctors fought to stabilise her.But her injuries were so bad she was pronounced dead a short time later.

Warren Shepherd, who was on his window cleaner rounds in Hattersley, said: ‘I just heard gun shots, bang, bang, bang – around ten of them, then a pause and a big explosion.‘I went around the back of the houses to see what happened and there was a police car that loked empty.‘There was people, neighbours stood around there and one of my customers said, ‘They’ve been shot! The police officers have been shot!’ Sir Peter Fahy said it was routine to send unarmed officers to a burglary call.

‘We believe the suspect was in a house in Abbey Gardens overnight, and at some point this morning has either himself made a call or had somebody else make a call reporting a burglary,’ Sir Peter said.‘This particular address was not known to us. So as would be routine, two unarmed officers were sent to the scene.‘When they arrived, it appears that the suspect emerged into the road and killed these two officers. A firearm was used, a grenade was also used.. These were two officers going about their normal duty. Like all officers they went to a variety of incidents not knowing what it was they would face.’

Sir Peter said he believed the suspect had been “protected by a criminal conspiracy to harbour him”, adding that the force was “fully determined” to investigate that conspiracy and bring those involved “to book”.Two people from the house in Hattersley, a man and a woman, were helping police with inquiries.The outrage prompted renewed calls for the routine arming of police.But Sir Peter said his force believed “passionately” that police should remain unarmed, despite the tragedy.

Cregan had been the subject of a huge manhunt after the murders of David Short, 46, and his son Mark, 23. A £50,000 reward had been offered for information about the case.David Short was killed at his home in Clayton, Manchester, on August 10, while his son Mark was gunned down at the Cotton Tree pub in nearby Droylsden, on May 25.Last night a cordon was in place on Clarendon Road around Hyde Police Station, two miles from Hattersley, where Cregan handed himself in to police.A controlled explosion is believed to have been carried out on a car parked outside the police station according to locals, who reported hearing a loud bang and spotted a plume of smoke. – Dailymail

Post Poll: Obama up 8 points over Romney in Virginia

Post Poll: Obama up 8 points over Romney in Virginia