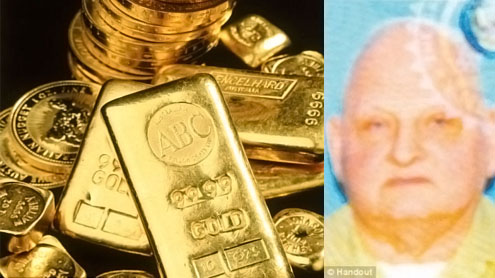 When 69-year-old Walter Samasko Jr died in May he left behind just $200 in the bank and no friends or family to lay claim to the meager inheritance.

He hadn’t worked since 1968 and was living off stock accounts of $140,000 and $25,000.But the real treasure was found at his Nevada home, along with his decaying body, one month later after neighbours complained of a foul smell.There officials discovered box upon box of gold coins and bars stowed away in Samasko’s garage, valued at a staggering $7 million or more.The 69-year-old had died from heart problems, a coroner found, at least one month before he was discovered.

Leaving no will, and with no known relatives, officials set about tracking down a list of people who had attended Samasko’s mother’s funeral after she died in 1992, the Las Vegas Sun reported.They managed to identify a first cousin, Arlene Magdanz, living in San Rafael, California.The gold, including coins from Mexico, England, Austria and South Africa dating to 1872, was hauled from the garage using a wheelbarrow and truck and deposited for safekeeping.

Other things found in the ‘anti-government’ pensioner’s home included a stash of conspiracy theory books and several guns, Carson City Clerk Alan Glover said.He told the paper the goal now is to get the hoard to Ms Magdanz as quickly as possibly, adding that it should be relatively straighforward given that they don’t have to deal with dozens of feuding relatives.

In fact no one had any idea that Samasko was sitting on such wealth.Ms Magdanz, a substitute teacher, could not be reached for comment. But a lawyer who talked to her said her first reaction was, ‘Oh, my God. Oh, my God.’She had not spoken to her cousin for a year.He rarely went out and never went to a doctor, Glover said. ‘He was obsessed with getting diseases from shots.’Samasko had lived in the house since the 1960s. His mother also lived there until her death. – Dailytimes