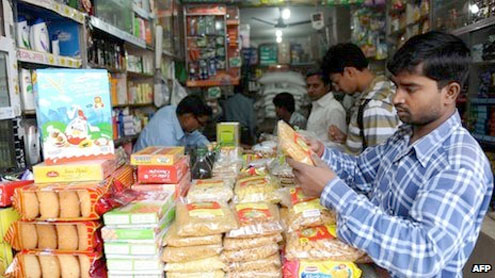 India’s government has once again cleared a controversial plan to open up its lucrative retail sector to global supermarket chains.

Last year, the government suspended a similar plan after fierce opposition from its allies and political rivals.International firms such as Walmart and Tesco will now be able to buy up to a 51% stake in multi-brand retailers.Analysts say the government has reintroduced the measure in an effort to revive a flagging economy.Prime Minister Manmohan Singh said: “I believe that these steps will help strengthen our growth process and generate employment in these difficult times.”

The decision was one of several key reforms announced by the government. It also approved a plan to allow foreign airlines to buy 49% stakes in local carriers, in the hope that this will boost the country’s troubled aviation sector. It also follows Thursday’s dramatic 14% rise in the price of diesel, which is heavily subsidised in India.The government was forced to back down on retail reform after the cabinet first undertook to open up the retail sector last November.The move had been strongly opposed by tens of thousands of small businesses and cornershops who fear they will be put out of business.

The opposition Bharatiya Janata Party and the Communists labelled it a “betrayal of democracy”.But this latest move has already been welcomed by economists who say it will transform the way Indians shop and will boost the economy.Some business leaders also backed the plan.Sunil Bharti Mittal, chief executive of conglomerate Bharti Enterprises, said: “The series of policy decisions announced by the government today signal that India is on the move.

“More importantly, they will boost sentiment within the domestic industry and provide much needed momentum to the economy.”Briefing reporters after the press conference, Trade Minister Anand Sharma said: “Views of all state governments were ascertained, some states received the proposal very well, some expressed reservations. We tried to build a consensus through an inclusive and democratic process.”Mr Sharma said the implementation of the policy had been left entirely to the states, suggesting that some opposed to reform could opt out.

Reports suggest that other conditions have also been imposed on groups wanting to invest in India.For example, companies will have to invest at least $100m (£67m), open outlets only in towns with a population of more than one million and source at least 30% of produce from India, the AFP news agency reports.Similar conditions were suggested when the government first attempted to introduce the plan last year.Multinational retailers such as like Walmart, Carrefour and Tesco already have outlets in India, but they deal with smaller retailers. This decision allows these chains to sell directly to Indian consumers.

“Tesco welcomes this positive development but we await further detail on the conditions… we are hopeful that [it] will allow more Indian consumers, businesses and communities to benefit from world-class retail investment,” said a statement by Tesco.Wal-Mart said greater investment following the government’s move would “lower the price of products, improve the livelihoods of farmers and ease supply-side inflation.”Through these, and several other initiatives, we hope to make a positive impact on the lives of the people of India.” – BBC