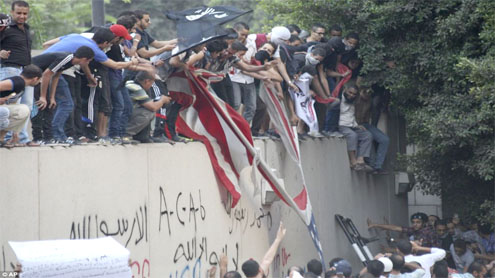 An American has been killed in Libya as protesters stormed the U.S. Embassies there and in Egypt in attacks on the September 11 anniversary over a film making fun of the prophet Muhammad.

A U.S. State department spokeswoman confirmed the American’s death to MailOnline, but did not provide further details, pending notification of next-of-kin. The person who was killed was an State Department officer at the embassy in Benghazi. Another American worker was wounded in the hand.Witnesses said that much of the consulate has been burned by a fire set inside. Pictures from the area showed the building engulfed by flames.

The video, called Innocence of Muslims, is shot in English, but provides Arabic subtitles.It was written, directed and produced by Israeli-American real-estate developer Sam Bacile in California, according to the Wall Street Journal.Bacile, 52, told the paper that he regards Islam as a ‘cancer’ and was able to produce the film with $5million that he raised with the help of about 100 Jewish donors.

The film, clips of which were put on the video-sharing website YouTube, depicts Muhammad as a fraud, showing him having sex and calling for massacres.Throughout the video, ‘Muhammad’ – portrayed by an American actor – is branded a ‘bastard,’ ‘rapist’ and ‘child molester’ by other actors in the film.Muslims find it offensive to depict Muhammad in any fashion, much less in an insulting way.Ultra-conservatives have claimed the actions are a protest against the film, which they say attacks Islam’s prophet, Muhammad, and is a form of blasphemy.