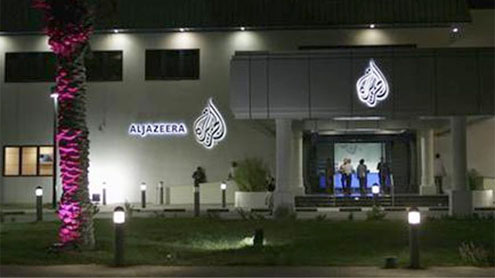 Qatar-based Al Jazeera news network’s mobile service was hacked on Sunday, four days after a number of its Internet websites came under cyber attack, it reported on its website Al jazeera.net.

‘The story claiming that the Prime Minister (Sheikh Hamad bin Jassem) has been the target of an assassination attempt in the royal palace is completely false and was a result of hacking of the service,’ the channel said in breaking news.The main Arab satellite news channel said the claim was among three false texts sent via its mobile service ‘which has been hacked.’

Social networks, including Twitter, quoted Al Jazeera’s mobile service on Sunday as saying that Shaikh Hamad was targeted in an attack on the palace in Doha and that the wife of the emir, Sheikha Moza bint Nasser, was lightly wounded.On Wednesday, the network said that a number of its websites had been hacked, and Internet users reported that pro-Syrian regime slogans were posted on the broadcaster’s pages.

Internet reports had said that the websites of the Qatar-owned network appeared with a Syrian flag along with the word ‘Hack’ and a message saying the piracy was in ‘response to the hostile position of the channel towards Syria, its people and government.’The message also cited Al Jazeera’s ‘spread of false news.’Qatar has repeatedly voiced support for the Syrian opposition against President Bashar Al Assad’s regime and has openly called for arming rebels there, drawing strong criticism from Damascus which accuses Al Jazeera of pro-rebel bias. – Khaleejnews