Prince Harry back in Afghanistan as Apache helicopter pilot 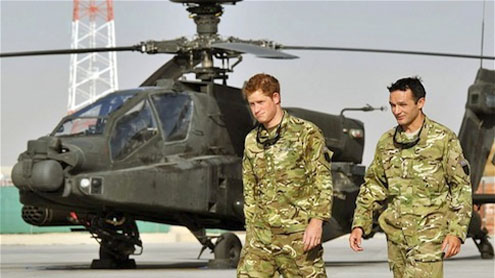 Prince Harry back in Afghanistan as Apache helicopter pilot

Captain Wales begins four-month tour of duty with British army in command of Apache helicopter based at Camp Bastion.

Prince Harry has flown into Afghanistan to begin a four-month tour of duty with the British army, during which he will command one of the UK’s Apache attack helicopters.The prince, who is known as Captain Wales within the armed forces, flew into the conflict zone from RAF Brize Norton along with hundreds of other military personnel as part of the regular rotation of forces.The 27-year-old, who is third in line to the throne, looked relaxed, if slightly tired on Friday, and gave a thumbs-up after a long journey on a standard troop flight from England.

During his stay, he will be based at Camp Bastion in Helmand province, the biggest military base in the country and the UK’s logistical and support hub.The prince’s commander said on Friday he hoped he would be “left to get on with his duties”, though the media interest is likely to be intense.”Prince Harry, like any soldier, considers it a great honour to represent his country in Her Majesty’s armed forces wherever it chooses to deploy him,” St James’s Palace said in a statement.As a recently qualified co-pilot gunner with 662 Squadron, the royal will be in charge of one of the two-seater Apaches. The army has 67 of the aircraft in total, but the number being used in Afghanistan is a closely guarded secret.

Prince Harry has wanted to return to the country ever since his first tour in 2008 ended in farce when an agreed – but controversial – media blackout was inadvertently broken by an Australian magazine and he was rushed back to Britain for his own safety.Once he successfully completed his 16-month training in February this year, the Ministry of Defence made it clear there was every likelihood the prince would return to Afghanistan as part of normal duties, and probably before the end of the year.Though critics have raised concerns that his presence in Afghanistan could encourage insurgents to target both him and his colleagues, and have accused the MoD of putting good PR before common sense, commanders believe Harry’s new role, and the base from where he will fly, will offer him and those around him adequate security.

The UK has not lost any Apache helicopters during the campaign against the insurgents, and Camp Bastion is generally regarded as safe.On this deployment the MoD decided again to work with the UK’s major media organisations, including the Guardian, but this time to publicise it rather than keep it secret.An agreement involving 800 news outlets allows the media to report on the prince’s activities, as long as the stories do not compromise “operational security”. Editors have agreed to act responsibly and to inform the MoD when any potential issues arise.At the end of his tour, the MoD is expected to release pooled footage of the prince on duty and an interview. It will be given to those organisations that have stuck to the deal.

Given the prince’s proclivity for buffoonish behaviour, the military knows that publicising his deployment is a potentially risky strategy.It is only three weeks since the most recent embarrassment, when Harry was photographed naked at a private party in Las Vegas on what appears now to have been a last drunken “hurrah” with friends before his deployment.On Thursday, the Press Complaints Commission concluded that an investigation into the Sun’s decision to publish nude photos of Prince Harry would be inappropriate at this time.

However, the prince, who will celebrate his 28th birthday in less than two weeks, is a popular figure in the armed forces, and personnel serving in Afghanistan leaped to his defence during the most recent furore, posting naked photos of themselves on Facebook.The army’s top brass also believe it inconceivable that Capt Wales, who is now considered to be responsible enough to take on royal duties on his own, would repeat “in theatre” the kind of high jinks and misjudgments that have drawn criticism in the past.The prince has been training for the tour at the army’s Wattisham airfield in Suffolk, home to the 3 Regiment, Army Air Corps. His co-pilot, who has not been named, has been with him since the spring and will accompany him throughout the tour.

When he qualified on the Apache, the prince was awarded the prize for being “best front-seat pilot” – an accolade to “mark out the student whose overall performance during the course is assessed as the best amongst his peer group”.Lieutenant Colonel Tim de la Rue, deputy commander of the Joint Aviation Group (JAG), which provides helicopter support to Nato forces, said: “Captain Wales is a serving soldier and a qualified Apache pilot having completed the Apache conversion to role course earlier this year.”As such, and after further flying experience, he has deployed along with the rest of the squadron as part of a long-planned and scheduled deployment to provide support to Isaf and Afghan forces operating in Helmand.”

Captain Jock Gordon, commander of the JAG, said: “Working alongside his colleagues in the squadron, he will be in a difficult and demanding job and I ask that he be left alone to get on with his duties and allowed to focus on delivering support to coalition forces on the ground.”David Cameron’s official spokesman declined to say whether the prime minister had been consulted on Harry’s deployment, saying only: “It is an operational decision. We wouldn’t comment on an operational matter.”

What will Harry do in Afghanistan?

After more than 18 months learning to fly one of the world’s deadliest helicopters, Prince Harry will soon put his training into practice.The Apache is used in a number of roles in Afghanistan but all revolve around its devastating firepower, including laser-guided Hellfire missiles and wing-mounted aerial rockets.Harry, who has described the aircraft as “awesome”, will act as the co-pilot gunner operating its weapons from the front seat, while his co-pilot will sit behind him.

Missions will involve supporting ground troops who have come under attack from Taliban insurgents. The weapons can target buildings being used for cover by the Taliban, reducing them to rubble. And for combat in the open, the aircraft’s 30mm chain gun can be controlled from the gunner’s helmet-mounted display.Other missions include providing escort cover for aircraft, usually RAF Chinooks, that may be carrying troops or equipment around Afghanistan.The Apache can operate in most weather and at night, so can be used to gather intelligence in many conditions, including the harsh Afghan winters.• This article was amended on 7 September 2012. The original said Prince Harry has been training for the tour at RAF Wattisham. This has been corrected to say the army’s Wattisham airfield. – Guardian