Obama: Romney has no timetable to end Afghan war 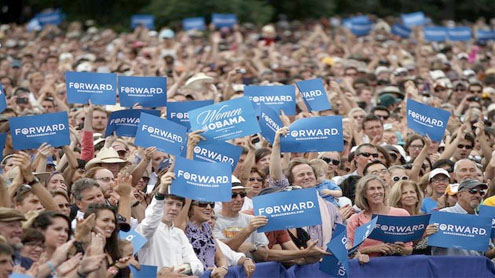 Romney has no timetable to end Afghan war

BOULDER, Colo: President Barack Obama warned young voters on Sunday that Mitt Romney has no plan to end the war in Afghanistan. Obama has been hitting his Republican rival on the issue ever since Romney failed to mention the war in his nomination acceptance speech.

“This November, you get to decide the future of the Afghanistan war,” Obama told some 13,000 people at a rally on the campus of the University of Colorado Boulder.”We are bringing our troops home from Afghanistan. And I’ve set a timetable. We will have them all out of there by 2014. Gov. Romney doesn’t have a timetable. I think he’s wrong,” the president said.The Romney campaign disputed Obama’s charge, calling it “another attempt to politicize the war” and said Romney embraces the 2014 timetable.

“President Obama dishonestly argues that anyone who disagrees with his politicized decision making in Afghanistan is arguing for endless war,” spokeswoman Amanda Henneberg told Yahoo News by email.”As president, Gov. Romney’s goal will be to complete a successful transition to Afghan security forces by the end of 2014 by evaluating conditions on the ground and soliciting the best advice of our military commanders, not ignoring them,” she said.

The Afghanistan/Pakistan section of Romney’s website doesn’t mention the Obama-championed, NATO-endorsed withdrawal timetable that calls for pulling most of the alliance’s combat forces out by the end of 2014. Under that plan, an as-yet unspecified number of troops would remain, notably to train their Afghan counterparts.”Withdrawal of U.S. forces from Afghanistan under a Romney administration will be based on conditions on the ground as assessed by our military commanders,” the candidate’s website says. It promises that, if elected, Romney will undertake a review of current policy.

But the candidate himself has endorsed the 2014 date.”The timetable, by the end of 2014, is the right timetable for us to be completely withdrawn from Afghanistan, other than a small footprint of support forces,” he said at a Republican primary debate in November 2011.Romney has also accused Obama of withdrawing 33,000 “surge” forces by the end of September for political purposes—the Democratic base didn’t much like the president’s decision to escalate what is now America’s longest war, and Americans in general have soured on the conflict. But the former Massachusetts governor, in the words of the Council on Foreign Relations think tank, “has not given specific details on how his plans would differ from current policy” when it comes to transferring security responsibilities to the Afghans. – Yahoonews