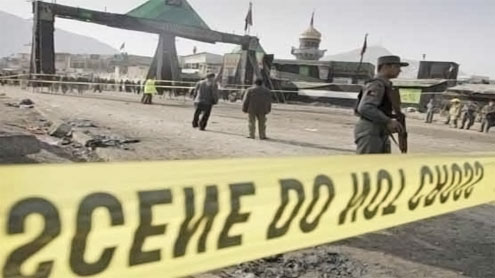 A suicide bombing at a large NATO military base in central Afghanistan killed at least six Afghan civilians around dawn Saturday, officials said.

A spokesman for NATO s International Security Assistance force said there were no ISAF casualties.”A suicide bomber on foot detonated near the gate of the base in Sayedabad, Wardak province, opening the way for a truck suicide bombing that followed him,” provincial government spokesman Shahiddullah Shahid told AFP.

“Together they have killed six local civilians, wounded four civilians and two intelligence personnel. There might be other casualties as well but I don t have information about them,” he said.A witness said a small bazaar near the base was “totally destroyed” by the huge explosion. Many civilians work on or near NATO bases and bazaars often spring up to cater for them.

A spokesman for Taliban insurgents claimed responsibility for the attack in a text message to AFP.The United Nations says 1,145 civilians were killed and 1,954 wounded in the war in the first six months of this year, with the United Nations blaming 80 percent of the deaths on insurgents.NATO has some 130,000 troops in Afghanistan fighting the insurgents alongside government forces. – Dunyanews