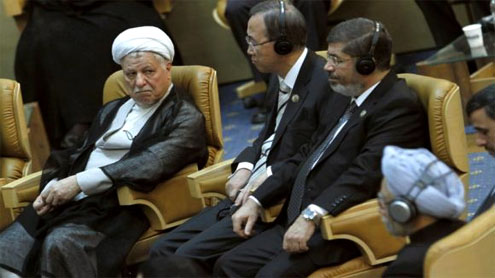 Mursi’s address to the Non-Aligned Movement summit in Tehran prompted a walkout by the Damascus delegation and drew a sharp response from Syria’s Foreign Minister Walid Muallem, who accused him of inciting further bloodshed in Syria.It also embarrassed the Iranian hosts of the two-day NAM summit , who are staunch supporters of Assad’s regime.“The revolution in Egypt is the cornerstone for the Arab Spring, which started days after Tunisia and then it was followed by Libya and Yemen and now the revolution in Syria against its oppressive regime,” Mursi said in his speech.

“Our solidarity with the struggle of Syrians against an oppressive regime that has lost its legitimacy is an ethical duty, and a political and strategic necessity,” he added.His comments amounted to “interference in Syria’s internal affairs and … incites continued bloodshed in Syria,” Muallem said afterward, as quoted by Syrian state television.Mursi, whose Muslim Brotherhood movement is affiliated with one of Syria’s main opposition groups, became the first Egyptian leader to visit Iran since the Islamic revolution in 1979, when he landed in Tehran early Thursday.

Egypt severed ties with Iran in the aftermath of the revolution that brought to power a theocracy that opposed Egypt’s peace treaty with Israel and welcomed the assassination of Egyptian President Anwar Sadat, who forged the deal.Seated at the summit next to Iranian President Mahmoud Ahmadinejad, Mursi was attending the meeting to hand over the NAM’s rotating leadership to Iran.Iran had been supportive of the Arab Spring uprisings that brought Mursi to power in Egypt, but extended its backing to Syria when protests followed by an armed insurrection broke out against Assad.

The Syrian Observatory for Human Rights says more than 25,000 people have been killed in the 17-month-long revolt against Assad, which has turned into a brutal civil war.Mursi, a conservative Sunni Islamist, alluded to sectarian animosities that have featured the regional alignments over Syria, which is led by the minority Alawite sect linked to Shiite Islam.“May God be content with our leaders Abu Bakr, Omar, Uthman and Ali, and all the Prophet (Mohammed’s) companions,” he said in the preamble to his speech.A major distinction between Sunnis and Shiites is the Shiite belief that Abu Bakr, Omar and Uthman, Islam’s first leaders after Mohammed’s death, stole the Cailphate from Ali, whom the Shiites venerate.

The uprising in Syria has been marked by a spike in already volatile sectarian tensions in the region between Sunnis, who also rule the conservative Gulf monarchies that back the Syrian rebel, and Shiites.Mursi’s visit marks a cautious shift in his country’s approach to Iran, which his ousted predecessor Hosni Mubarak had suspected of trying to destabilize his regime.Egypt’s diplomatic line will be “more agile and active,” leaving behind the “stagnation” under Mubarak’s rule, Mursi’s spokesman Yassir Ali said before the trip.

Mursi, who has pledged to honor his country’s treaty with Israel, is also closer than Mubarak to Iran’s position on Israel and the Palestinians, especially the Islamist Hamas ruler of Gaza, on Egypt’s doorstep.He emphasized in his speech the Palestinians’ “right to self determination and a free state” and demanded support for their bid to become full members of the United Nations.Mursi’s spokesman Ali had said the president’s visit, on his way back from a trip to China, would last only several hours, and he would discuss only summit related matters. – Arabnews