Attacks in Iraq kill general and 4 others 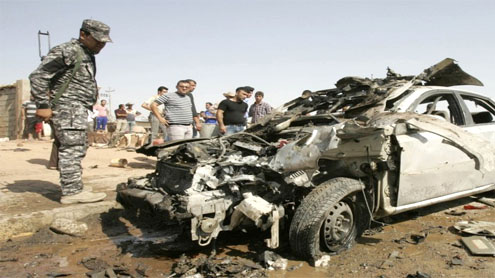 Attacks in Iraq kill general and 4 others

Iraqi authorities say a one-star general is among five security officials who killed in a series of attacks.

Police said Brig. Gen. Nadhum Tayeh was driving to work early Wednesday when a carload of gunmen opened fire on him in Baghdad.Hours later, authorities said an off-duty army colonel was killed in a roadside bombing in northern Baghdad. Officials spoke on condition of anonymity in both cases because they were not authorized to release the information.

The deadliest attack of the day came in the city of Kirkuk, where three policemen were killed and six wounded. City police Cmdr. Sarhad Qadir said their convoy hit another roadside bomb.Kirkuk is 290 kilometers (180 miles) north of Baghdad.Security forces are a top target for insurgents seeking to destabilize Iraq. – Khaleejnews

Rice: World is ‘chaotic and dangerous’ with a weak USA

Former editor of Scottish News of the World arrested

Former editor of Scottish News of the World arrested