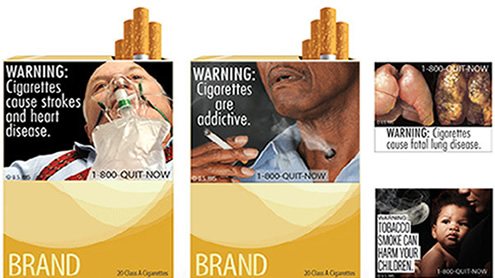 A government mandate requiring tobacco companies to place graphic images on their products warning of the dangers of smoking was tossed out Friday by a divided federal appeals court, with the majority saying the requirements were a violation of free speech protections.

The Food and Drug Administration was ordered to immediately revise its rules. “The First Amendment requires the government not only to state a substantial interest justifying a regulation on commercial speech, but also to show that its regulation directly advances that goal,” wrote Judge Janice Rogers Brown. “FDA failed to present any data — much less the substantial evidence required under the federal law — showing that enacting their proposed graphic warnings will accomplish the agency’s stated objective of reducing smoking rates. The rule thus cannot pass muster” under past court precedent.

The Family Smoking Prevention and Tobacco Control Act, passed in 2009, would have required nine written warnings such as “Cigarettes are addictive” and “Tobacco smoke causes harm to children.” Also included would have been alternating images of a corpse and smoke-infected lungs. A group of tobacco companies led by R.J. Reynolds and Lorillard had sued, saying the warnings would be cost-prohibitive and would dominate and damage the packaging and promotion of their brands. The legal question was whether the new labeling was purely factual and accurate in nature or was designed to discourage use of the products.

A federal judge in March had ruled in favor of the tobacco companies. The 2-1 U.S Court of Appeals for the District of Columbia panel has now affirmed that ruling. Brown and Judge A. Raymond Randolph rejected the FDA’s assertion that it had a governmental interest in “effectively communicating health information” regarding the negative effects of cigarettes. “The government’s attempt to reformulate its interest as purely informational is unconvincing, as an interest in ‘effective’ communication is too vague to stand on its own,” said Brown, named to the bench by President George W. Bush. “Indeed, the government’s chosen buzzwords, which it reiterates through the rulemaking, prompt an obvious question: ‘effective’ in what sense?” In dissent, Judge Judith Rogers said the rules do not violate commercial speech protections.

“The government has an interest of paramount importance in effectively conveying information about the health risks of smoking to adolescent would-be smokers and other consumers,” said Rogers, named to the bench by President Clinton. “The tobacco companies’ decades of deception regarding these risks, especially the risk of addiction, buttress this interest.” Other color images required under the agency rules would have been: a man smoking through a tracheotomy hole in his throat; smoke wafting from a child being kissed by her mother; and a diseased mouth, presumably from oral cancer linked to chewing. There was no immediate reaction to the ruling from the FDA and from the Justice Department, which defended the law in court.

The government can now appeal to the Supreme Court for review, which stands a good chance of accepting the case. A separate federal appeals court in Cincinnati in March concluded that the FDA law was constitutional. Such “circuit splits” are often a good indicator the justices would intervene and offer the final constitutional word. Health groups condemned the latest decision. “Today’s ruling ignores strong scientific evidence supporting the effectiveness of larger, graphic warning labels in communicating the health dangers of tobacco use,” said Dr. Robert Block, president of the American Academy of Pediatrics.

“With 10 million cigarettes sold every minute and almost 3,000 children under the age of 18 starting to smoke each day, this ruling puts children’s lives at risk.” The word and image warning labels would have covered half of the cigarette packs sold at retail outlets and 20% of cigarette advertising. The warnings were scheduled to appear on cigarette packs beginning next month. The federal law in question would also regulate the amount of nicotine and other substances in tobacco, and limit promotion of the products and related promotional merchandise at public events like sporting contests.

The free speech aspect was the only issue in the current case. Several other lawsuits over the labels are pending in federal court, part a two-decade federal and state effort to force tobacco companies to limit their advertising and settle billions of dollars in state and private class-action claims over the health dangers of smoking. The latest case is R.J. Reynolds Tobacco Company v. U.S. Food and Drug Administration (11-5332). -CNN