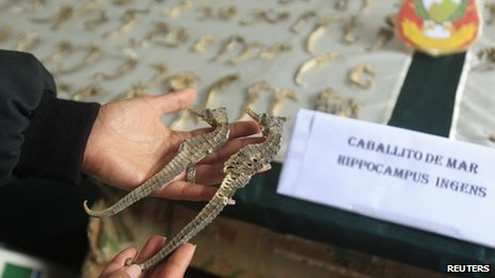 Police in Peru have seized more than 16,000 dried seahorses which were to be exported illegally to Asian countries.

Seahorse powder is used in China, Japan and elsewhere in traditional medicine and for its alleged aphrodisiac uses. Peruvian authorities say the traffickers ran away and abandoned their illicit cargo on a street in the capital, Lima. Police chief Victor Fernandez told the media the cargo could have fetched up to $250,000 (£160,000) abroad. Seahorse fishing is illegal in Peru, but the high prices paid for seahorse powder abroad make it difficult for the authorities to enforce the ban.

Mr Fernandez said the cargo – three cases weighing 27.5kg (60 pounds) – was left behind following a police operation near the Lima’s airport. “They are sent to Asian countries and used as aphrodisiacs. In China this product is also used to cure asthma,” he told the media Mattia Cabitza in Lima.

The marine fish, which finds northern Peru’s warmer waters a perfect breeding ground, is protected by the Convention on International Trade in Endangered Species (Cites). But Mr Fernandez said that last year a total of 20 tonnes of dried seahorses were seized across the world – half a tonne in Peru alone. -BCC