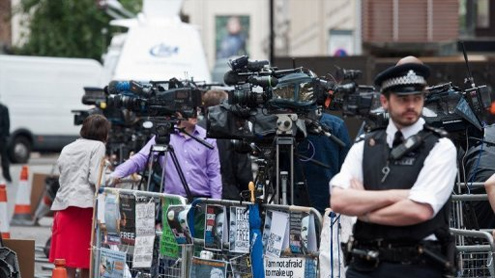 Ecuador has received powerful backing from regional allies as they warned Britain of “grave consequences” if it breaches diplomatic security at Ecuador’s embassy in London, where WikiLeaks founder Julian Assange is holed up.

The warning capped two days of a tense diplomatic standoff between Britain and the South American nation, which on Thursday granted asylum to Assange, whose website enraged the United States by publishing a vast cache of confidential government files. Britain has responded by vowing not to grant him safe passage out of the country. But Ecuador called on its allies from the Venezuela-led so-called Bolivarian Alliance for the People of Our America (ALBA), whose foreign ministers flew to the Ecuadoran economic capital and displayed late Saturday full diplomatic support.

“We warn the government of the United Kingdom that it will face grave consequences around the world if it directly breaches the territorial integrity of the Embassy of the Republic of Ecuador in London,” said a statement issued at the end of the ALBA meeting. The statement, read by Ecuadoran Foreign Minister Nicolas Maduro, also rejected Britain’s “threats vis-a-vis our territorial integrity and sovereignty.” The regional group, which also includes Bolivia, Cuba, Nicaragua as well as a number of smaller Caribbean nations, expressed its “categorical support for Ecuador’s sovereign right” to grant asylum to Assange and urged other world nations to reject what it called “Britain’s attempts to impose its will by force.”

ALBA nations also called on the United Nations to discuss the issue of inviolability of diplomatic installations around the world. Britain has angered Ecuador by suggesting it could invoke the Diplomatic and Consular Premises Act of 1987, which it says allows it to revoke the diplomatic immunity of an embassy on British soil and go in to arrest Assange. Assange, whose website caused a stir in the diplomatic world when it published a trove of diplomatic cables and military logs from the wars in Iraq and Afghanistan, took refuge in the embassy on June 19 to evade extradition to Sweden, where he is wanted for questioning over alleged sexual misconduct.

Assange, 41, is set to face the world’s media on Sunday from the safe haven of London’s Ecuadoran embassy but risks arrest if he takes even one step out of the building. With police officers primed to detain him, Assange must find a way of speaking publicly without setting foot outside, raising the possibility of him being forced to speak from a balcony or lean out of a window. WikiLeaks was tight-lipped about the logistics of Assange’s planned appearance at 1300 GMT, with spokesman Kristinn Hrafnsson telling AFP what little he knew could not be discussed for “security reasons.”

But Britain’s Foreign Office warned that the steps to the embassy were considered British territory while police said officers would take “appropriate” action” if he strayed from the building. Earlier Saturday, Ecuadoran President Rafael Correa went on the offensive as he slammed what he called Britain’s “vulgar threats” to remove Assange from Ecuador’s London embassy.  “Never, as long as I am president, will Ecuador accept threats like these, which are absolutely vulgar, inconsiderate and intolerable,” Correa said in a weekly statement. “We will not give up our sovereignty. We respect everyone, and we are always seeking dialogue, but the final decision is ours.” The Organization of American States meanwhile has called a meeting of foreign ministers for August 24 to discuss the situation around Assange. -Yahoonews