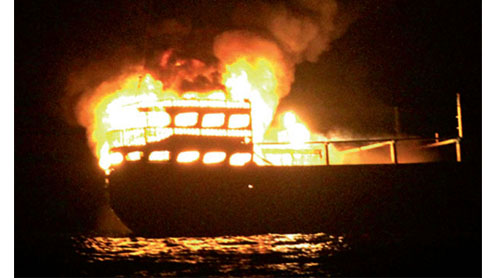 Strained ties between the US and Iran did not stop the rescue of 10 Iranian sailors from their burning vessel by a US warship on Thursday. This is the second rescue of Iranian sailors by the US Navy this year.

The guided-missile destroyer USS James E. Williams saved the men in the Gulf of Oman, according to 5th Fleet spokesman Lieutenant Greg Raelson.‘‘The vessel was flying an Iranian flag.  The mariners — who claim to be Iranian — were well cared for and received medical treatment aboard James E.Williams,’’ said Lt Raelson.The mariners were shifted to the aircraft carrier USS Enterprise where they received further medical treatment before being transported back to the James E. Williams to await repatriation efforts.

The James E. Williams is currently deployed as part of the Enterprise Carrier Strike Group to the US 5th Fleet area of responsibility conducting maritime security operations and theatre security cooperation efforts.Earlier in January, a US Navy ship rescued 13 Iranian sailors from a hijacked fishing boat.The destroyer, USS Kidd was involved in the action and saved the men from the clutches of pirates near the Strait of Hormuz.Tensions between Iran and the West have risen over its disputed nuclear programme which have invited economic sanctions. Tehran has also threatened to block the strategic Strait of Hormuz. – Khaleejnews

Kingdom has SR 1 trillion worth of Zakat: Saleh Kamel