Early Man was not alone: study 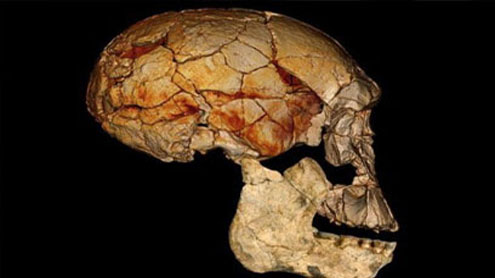 Early Man was not alone:study

Findings published in the journal Nature touch on the odyssey of our ancestor, the upright-walking early human known as Homo erectus.H. erectus and a tool-making relative called Homo habilis were probably contemporaries of an even older species called Homo rudolfensis, the scientists contend.‘Human evolution (is) clearly not the straight line that it once was’ thought to be, study co-author Fred Spoor said in a teleconference.

Spoor and a team dug up teeth, face and jaw fragments from sediment dated to the Pleistocene period at a location east of Lake Turkana in northern Kenya between 2007 and 2009.The prize culminated an agonising search for clues about a flat-faced, large-brained hominid whose skull had been found nearby in 1972.Known as KNM-ER 1470, or 1470 for short, the hominid had lived around two million years ago.But that was the only thing that was clear, for palaeontologists fought bitterly over its identity.

Until 2007, such evidence remained elusive, for the skull lacked a lower jawbone, a vital piece of evidence.‘Then our luck magically changed, and within three years we found three fossils which we believe are attributable to the same species as 1470,’ said Meave Leakey, who had discovered 1470 with her husband Richard Leakey.Their daughter Louise was part of the team that found the new fossils.The new fragments of two individuals that resemble 1470 are between 1.78 million and 1.95 million years old and were found within a 10-kilometre (six-mile) radius of the 1470 site.

‘One of the big problems with the skull 1470 was that, yes it is remarkably complete with the whole brain case there and a good part of the face, but it doesn’t have teeth and it doesn’t have a lower jaw with it,’ said Spoor.‘This (new) little skull had teeth and in fact the teeth are very well preserved.’The new fossils were gently removed from sandstone using a dental drill before being scanned inside and out at a hospital in the Kenyan capital Nairobi.The scans were used in a virtual reconstruction of the entire lower jaw, which proved a good fit with the upper jaw of 1470.

The result: a hominid that most likely is of an even older lineage of homo called H. rudolfensis. If so, it deals a blow to a rival theory that 1470 was a misshapen habilis.‘Statistically speaking, the chances that this is really a separate species have now greatly improved,’ said Spoor.The three species presumably stayed out of each other’s way and ate different foods, the authors surmise.The find is ‘significant, because they answer a key question in our evolutionary past — how diverse was our genus close to the base of the human lineage?’ said Leakey.

Other experts said the find showed that the six-million-year-old human family tree had complex roots, but cautioned about how they should be interpreted.For instance, some authorities contend that H. erectus evolved from H. habilis, while others insist the two were cousin or sister species.The fossils ‘help to confirm the existence of a distinctive kind of early human nearly two million years ago,’ said Chris Stringer of London’s Natural History Museum.

‘Whether either of these two lineages (habilis and rudolfensis) was ancestral to Homo erectus, let alone to modern humans, remains uncertain,’ Bernard Wood of the Center for the Advanced Study of Hominid Paleobiology at George Washington University said in a commentary also carried by Nature. – Khaleejnews

India ranks No 2 in Google search queries for education

Australia hails Pearson as ‘among the greats

Australia hails Pearson as ‘among the greats