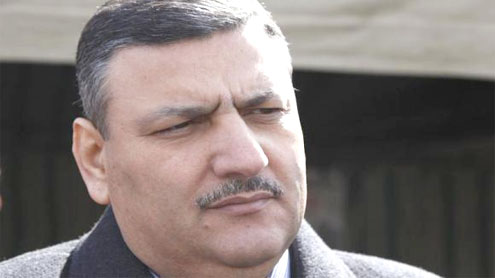 AMMAN, Jordan : Syrian Prime Minister Riyad Hijab has defected to the opposition seeking to overthrow President Bashar Assad, a spokesman for Hijab said on Monday, marking one of the highest profile desertions from the Damascus government.

“I announce today my defection from the killing and terrorist regime and I announce that I have joined the ranks of the freedom and dignity revolution,” Hijab said in a statement read in his name by the spokesman, which was broadcast on Al Jazeera television. “I announce that I am from today a soldier in this blessed revolution.”The opposition Syrian National Council said two government ministers and three senior army officers had defected to Jordan along with Hijab, but the assertions could not be immediately verified.

SNC executive member Bassam Ishak said three officers with rank of brigadier-general and two ministers, whose names were not disclosed, had joined Hijab in deserting Syrian President Bashar Assad 17 months into a revolt against his rule.An official source in the Jordanian capital Amman confirmed that Hijab had gone over to the anti-Assad opposition after fleeing across the border with his family.“There were a number of officials with (Hijab) but we are still taking some steps so there is no hurry in identifying them,” said another SNC member, Ahmed Ramadan.

“In order to prevent some pre-emptive strikes, there must be caution in some of the announcements.”Ramadan said another 15 Syrian diplomats and political figures were planning to defect. “We consider that the unraveling of the regime has entered a very sensitive phase and the SNC is dealing with it very seriously,” he said.

‘Fired’
Syrian state television said Hijab had been fired, but an official source in the Jordanian capital Amman said he had been dismissed only after he fled across the border with his family.Syrian state television reported Hijab’s dismissal as government forces appeared to prepare a ground assault to clear battered rebels from Aleppo, the country’s biggest city.Hijab was a top official of the ruling Baath party but, like all other senior defectors so far from the government and armed forces, he was also a Sunni Muslim rather than a member of Assad’s Alawite sect, which has long dominated the Syrian state.

“Hijab is in Jordan with his family,” said the Jordanian official source, who did not want to be further identified. The source said Hijab had defected to Jordan before his sacking.Assad appointed Hijab, formerly agriculture minister, as prime minister only in June following a parliamentary election which authorities said was a step toward political reform but which opponents dismissed as a sham.

Hijab’s home province of Deir Al-Zor has been under heavy Syrian army shelling for several weeks as Assad’s forces try to dislodge rebels from large areas of countryside there.
Syrian television said Omar Ghalawanji, who was previously a deputy prime minister, had been appointed to lead a temporary, caretaker government on Monday.Assad and his father, who was president before him, have consistently appointed premiers from the majority Sunni community.

However, the position is largely powerless and control has remained with Assad, his family and security chiefs from the Alawite community, an offshoot of Shiite Islam.“Defections are occurring in all components of the regime save its hard inner core, which for now has given no signs of fracturing,” said Peter Harling at the International Crisis Group think-tank.“For months the regime has been eroding and shedding its outer layers, while rebuilding itself around a large, diehard fighting force,” he said. “The regime as we knew it is certainly much weakened, but the question remains of how to deal with what it has become.”

Bomb blast
Earlier in the day, a bomb blast hit the Damascus headquarters of Syria’s state broadcaster as troops backed by fighter jets kept up an offensive against the last rebel bastion in the capital.The bomb exploded on the third floor of the state television and radio building, state TV said. However, while the rebels may have struck a symbolic blow in their 17-month-old uprising against Assad, Information Minister Omran Zoabi said none of the injuries was serious, and the channel continued broadcasting.

Rebels in districts of Aleppo visited by Reuters journalists seemed battered, overwhelmed and running low on ammunition after days of intense shelling of their positions by tanks and heavy machine gun fire from helicopter gunships.Emboldened by an audacious bomb attack in Damascus that killed four of Assad’s top security officials last month, the rebels had tried to overrun the Damascus and Aleppo, the country’s commercial hub, near the Turkish border.
But the lightly armed rebels have been outgunned by the Syrian army’s superior weaponry. They were largely driven out of Damascus and are struggling to hold on to territorial gains made in Aleppo, a city of 2.5 million.

Damascus has criticized Gulf Arab states and Turkey for calling for the rebels to be armed, and state television has described the rebels as a “Turkish-Gulf militia,” saying dead Turkish and Afghan fighters had been found in Aleppo.Paralysis in the UN Security Council over how to stop the bloodshed forced peace envoy Kofi Annan to resign last week, his cease-fire plan a distant memory.The violence has already shown elements of a proxy war between Sunni and Shiite Islam which could spill beyond Syria’s border.

The rebels claimed responsibility for capturing 48 Iranians in Syria, forcing Tehran to call on Turkey and Qatar — major supporters of the rebels — to help secure their release.On Monday, Syrian army tanks shelled alleyways in Aleppo where rebels sought cover as a helicopter gunship fired heavy machine guns.Snipers ran on rooftops targeting rebels, and one of them shot at a rebel car filled with bombs, setting the vehicle on fire. Women and children fled the city, some crammed in the back of pickup trucks, while others walked on foot, heading to relatively safer rural areas.

Aleppo gateway
The main focus of fighting in Aleppo has been the Salaheddine district. One shell on Sunday hit a building next to the Reuters reporting team, pouring rubble on to the street and sending billows of smoke and dust into the sky.State television said Assad’s forces were “cleansing the terrorist filth” from the country, which has been sucked into an increasingly sectarian conflict that has killed about 18,000 people and could spill into neighboring states.

The army appeared to be using a similar strategy in Aleppo to the one used in other cities where they subjected opposition districts to heavy bombardment for days, weakening the rebels before moving in on the ground, clearing district by district.Syria’s two main cities had been relatively free of violence until last month when fighters poured into them, transforming the war. The government largely repelled the assault on Damascus but has had more difficulty recapturing Aleppo.

Rebel commanders say they anticipate a major Syrian army offensive in Aleppo and one fighter said they had already had to pull back from some streets after army snipers advanced on Saturday under cover of the fierce aerial and tank bombardment.“The Syrian army is penetrating our lines,” said Mohammad Salifi, a 35-year-old former government employee.

“So we were forced to strategically retreat until the shelling ends,” he said, adding the rebels were trying to push the army back again.Late on Sunday rebels clashed with the army in Aleppo’s southeastern Nayrab district, a fighter who called himself Abu Jumaa said. The army responded by shelling eastern districts. There were also clashes on the southern ring road, which could be a sign the army was preparing to surround the city.

Ruins
Once a busy shopping and restaurant district where residents would spend evenings with their families, Salaheddine is now white with dust, broken concrete and rubble.Tank shell holes gape wide on the top of buildings near the front line, and homes of families have been turned into look-outs and sniper locations for rebel fighters.

Large mounds of concrete are used as barriers to close off streets. Lamp-posts lie horizontally across the road after being downed by shelling.Civilians trickle back to collect their belongings and check on their homes. Late on Saturday, a confused old man stumbled into 15th street as rebels exchanged fire with the army.“Get out of the way! Get off the street!” fighters shouted, grabbing him and taking him to shelter.

“I just wanted to buy some blackberry juice,” he told the fighters, his face reflecting confusion and horror at the damage to his street. Instinctively, he took his personal ID card out of his chest pocket to show the rebels, a habit from the strict days of the Assad security officials.During the day, others emerged from damaged buildings.

A couple stood shaking with fear at an intersection a few meters from the fighting as a medic waved a car down to take them to safety.“Just to hold power he is willing to destroy our streets, our homes, kill our sons,” wept Fawzia Um Ahmed, referring to Assad’s determined counter-offensive against the rebels.“I can’t recognize these streets any more.”

Iranian support
Assad is supported by Shiite Iran and Lebanon’s armed Shiite Hezbollah movement.But the Sunni-ruled Muslim Gulf Arab states have called for rebels to be armed and Turkey has provided them with a base, angering Damascus and prompting Syrian state television on Sunday to refer to the rebels as a “Turkish-Gulf militia.”It said the bodies of Turkish and Afghan fighters had been found in Aleppo, without giving details.

On Sunday Syrian rebels said they were checking the identities of the captured Iranians to show that Tehran was involved in fighting for Assad, a rebel officer said.Iran says the captives were pilgrims visiting holy sites in Syria, abducted from a bus in Damascus.A senior Syrian intelligence officer defected to Jordan, Al Arabiya television reported on Sunday.

It said Yarub Shara was head of the Damascus branch of Political Security, an intelligence organization responsible for monitoring and suppressing dissent.In Damascus, residents said the bodies of six Palestinians arrested during a security sweep by the army in the southern Tadamon district were discovered on Sunday. Another nine men were missing, they said. Accounts from the capital could not be verified because the government restricts access. – Arabnews