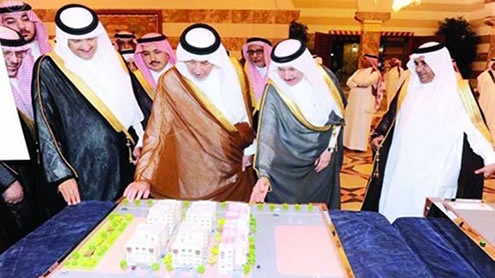 Prince Khaled described Khair Makkah as a humanitarian endowment project and called upon businessmen and philanthropists to support the project that would bring continuous benefits to the society. “I feel honored to open this great charitable project,” the governor said. “We have to invest our brains and determination and good management to reach the top.” Prince Khaled said the project reflected the significance of Islamic endowments and the Zakat system. “If we had implemented the Zakat and endowment system there would not have been any poor man or woman in the Islamic world,” he explained.

He emphasized the government’s support for such humanitarian projects. He thanked Prince Sultan for inviting him to launch the project and praised his humanitarian endeavors. The governor inspected details of the project’s first phase, which includes six residential buildings in Al-Naseem district. The buildings will be constructed following modern designs and international standards. The first phase of Khair Makkah will cost SR 35 million, which is divided into shares, each with a value of SR 1,000, and a person can take more than 10 shares.

DCA will manage the investment in the project, whose returns will be used to finance its centers. DCA will display the names of people who bought more than 100 shares. People can support the project by depositing their shares in its account No. 108001449990021 at Arab National Bank or by sending a check in the name of DCA. Prince Sultan expressed his satisfaction over the project’s launching. “We have a good example in Custodian of the Two Holy Mosques King Abdullah and Crown Prince Salman in charitable work. We can see so many charitable activities taking place in our country every day.” He emphasized the DCA’s plan to strengthen its endowment projects, adding that the social affairs minister would supervise it.

“We’ll not show any leniency in the management of endowments,” he added. The DCA has similar endowment projects in other parts of the country, including four residential towers: Prince Sultan Tower, Prince Salman Tower, Savola Tower and Etisalat Tower, in addition to Sheikh Saleh Al-Sairafi project. He said King Abdullah contributed SR 20 million to Prince Abdul Majeed Tower in Makkah. “There is a 16-floor building for the association in the central region of Madinah,” he added. Prince Sultan said DCA could now meet 50 percent of its requirements thanks to its endowment projects. “Every disabled child will cost the organization SR 70,000,” he added.-Arabnews