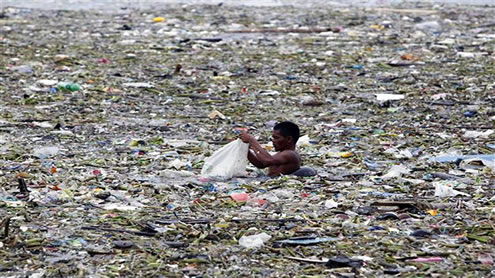 MANILA: Tens of thousands battled neck-deep floods in the Philippines yesterday as Typhoon Saola continued to bring heavy rains, with the death toll from the storm rising to eight, officials said.

Heavy downpours battered parts of the country for the third day in a row, forcing the evacuation of more than 145,000 people, said civil defence chief Benito Ramos. “It will take about four or five days for the waters to recede, assuming the rains stop now. But if it continues to rain, then naturally, these floodwaters will get even higher,” he told media. He warned that the bad weather would last for at least two more days as the floods rose in coastal areas just outside Manila. Schools in some suburban Manila areas and in nearby provinces remained suspended yesterday, but workers were forced to wade in floods as they struggled to report for work, officials said.

Three more people drowned, another was killed by a falling tree while a fifth was electrocuted while crossing a submerged bridge, adding to the three deaths reported on Monday, Ramos said. Rescuers were also searching for four fishermen still missing after two days at sea, he added. Typhoon Saola has slowed down as it moved away, prolonging its effects over the northern portions of the archipelago, said Ramos. Saola has dumped heavy rains across large parts of the Philippines since Sunday, causing floods and knocking out power lines to more than two million households, officials said. Power was restored a day later, but some roads and bridges had remained cut off.

Although Saola did not directly hit the Philippines, its massive rain band exacerbated the effects of a low pressure area in the vicinity. Saola was heading slowly northward to Taiwan, packing maximum sustained winds of 120 kilometers (74 miles) an hour near its centre, state weather bureau said. About 20 storms slam into the Philippines from the Pacific every year, causing heavy casualties and damage.-Arabnews