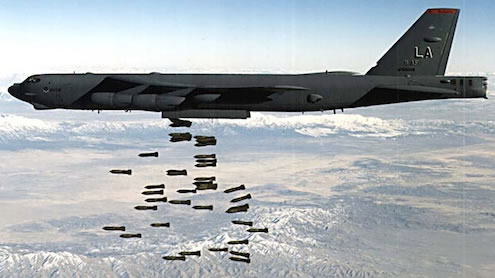 Lieutenant Colonel Jenns Robertson, 45, has spent the past six years working on one of the most unusual historical projects in modern times: compiling a database of every bomb dropped by U.S. forces dating back to World War I, media News reported.

“It has proven useful in the real world, in real time,” Robertson told the Boston Globe. “You can pick any place you want and look at it in detail.” The project is called THOR: Theater History of Operations Reports and allows people to use their computers to literally point and click to nearly any location on the globe and receive a near-instantaneous assessment of when and where U.S. bombs were dropped over the past century. Beyond the fascinating historical implications, Robertson’s bomb project is being used by the U.S. and other countries to save lives. In places like German, Vietnam and Iraq, the database is being examined to identify locations where there may still be unexploded ordinance.

Working from Maxwell Air Force Base, Alabama, Robertson has been working full-time on what started out as something of a hobby, combing through thousands upon thousands of documents. For examples, the Globe notes that Robertson has discovered about 1,000 original World War I raid reports, all entered by hand. And with each subsequent war, the sheer volume of documents continues to grow. For World War II alone, Robertson has scanned a reported 10,000 handwritten and typed pages of bombing records.

For the Vietnam War alone, Robertson has examined records showing that from October 1965 to May 1975 at least 456,365 cluster bombs were dropped on Cambodia, Laos and Vietnam. And since not all of the bombs actually exploded, the governments of these countries are working with the U.S. to examine the database in order to prevent civilian accidents and deaths. daily times monitor -Dailytimes