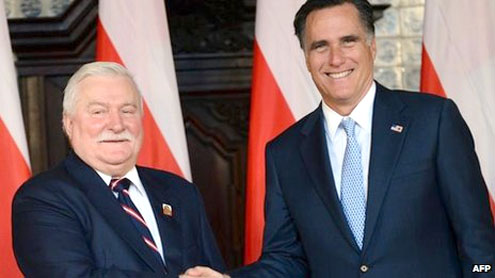 US presidential candidate Mitt Romney has met Polish ex-President Lech Walesa in Gdansk, on the final leg of a tour that has included Israel and the UK.

The Republican candidate is due to lay a wreath on Tuesday, to mark the Nazi invasion of Poland in September 1939.But trade union movement Solidarity has distanced itself from the visit.Mr Romney has just travelled from Israel where comments he made about the Palestinian economy angered a senior Palestinian official.He told an audience of Jewish donors that cultural differences explained why Israel’s economy was much larger than that of the Palestinians.

“You notice a stark difference in economic vitality. And as I come here and I look out over this city and consider the accomplishments of the people of this nation, I recognise the power of at least culture and a few other things,” he told the gathering in Jerusalem.Chief Palestinian negotiator Saeb Erekat said Mr Romney’s statements were racist and betrayed his ignorance of the region and the conflict in the Middle East.Mr Romney’s campaign spokeswoman said his comments had been “grossly mischaracterised”.

The first leg of his tour, in London, had also proved controversial when the UK media reacted angrily to comments he made about the readiness of Olympic Games organisers prior to the opening of London 2012.The former Massachusetts governor’s tour is intended to drum up support and increase his profile globally as he faces incumbent President Barack Obama in November’s presidential elections.Mr Romney was met in Gdansk by Mr Walesa – Solidarity’s first leader and Poland’s first democratically-elected president – and by Prime Minister Donald Tusk.

“He’s very open, and brimming with values, his wife is always by his side, he’s got five kids — we’re very much alike, I really like him and am pleased we met,” Mr Walesa told reporters.But the trade union movement, which originated in Gdansk and toppled Poland’s communist regime in the late 1980s, said it had nothing to do with Mr Romney’s trip to the city.”

Regretfully, we were informed by our friends from the American headquarters of AFL-CIO (trade union in the US), which represents more than 12 million employees… that Mitt Romney supported attacks on trade unions and employees’ rights,” Solidarity said in a statement.Mr Walesa and Solidarity have not seen eye to eye for some years.On Tuesday Mr Romney plans to conclude his tour with a speech in Warsaw where he will address the country’s relationship with the United States. – BBC

Hugo Chavez in Brazil on first foreign trip in a year

Hugo Chavez in Brazil on first foreign trip in a year