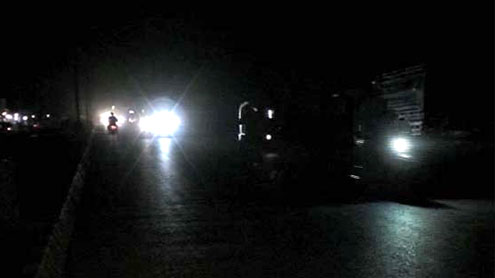 A power grid failure blacked out northern India for hours Monday, halting trains, forcing hospitals and airports onto backup power and providing a dark, sweltering reminder of the nation s inability to meet its energy needs as it strives to be an economic power.

While the midsummer outage was unique in its reach it hit 370 million people, more than the population of the United States and Canada combined its impact was softened by Indians  familiarity with almost daily blackouts of varying duration. Hospitals and major businesses have backup generators that seamlessly kick in during power cuts, and upscale homes are hooked to backup systems powered by truck batteries.

Nonetheless, some small businesses were forced to shut for the day. Buildings were without water because the pumps weren t working, and the vaunted New Delhi Metro, with 1.8 million daily riders, was paralyzed during the morning commute.”This will obviously get worse,” said Subhash Chawla, a 65-year-old retiree who took the Metro once power was restored. “Unless the Metro has a separate power supply, it will be chaos in the future.”

The grid that failed feeds the nation s breadbasket in Punjab, the war-wracked region of Kashmir, the burgeoning capital of New Delhi, the Dalai Lama s Himalayan headquarters in Dharmsala, and the world s most populous state, poverty-stricken Uttar Pradesh.Most affected areas had power back by late morning, less than nine hours after the outage started. By evening, 15 hours after the outage began, officials said full power had been restored.Many chafed at the inconvenience.

Amit Naik, a toy maker in New Delhi, was forced to close his workshop for the day.”There was no water, so my machine couldn t run. Other people had the same difficulties,” he said.The Confederation of Indian Industry said the outage was a reminder of the urgent need for the government to fix the power sector, ensure a steady supply of coal for power plants and reform the electricity utilities.Transmission and distribution losses in some states are as much as 50 percent because of theft and corruption by employees in the power industry. India s Central Electricity Authority reported power deficits of about 8 percent in recent months. – Dunyanews