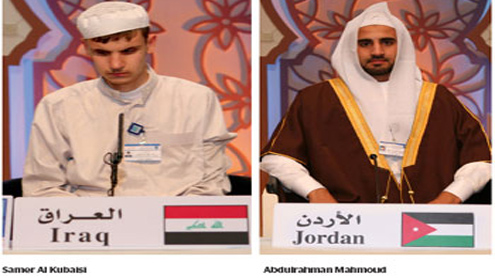 Visual impairment, though a tough obstacle for many, was an incentive to a smart young contestant who represents Iraq in the 16th session of the Dubai International Holy Quran Award.

Gifted with a sharp memory, 19-year-old Samer Al Kubaisi, was able to memorise the 77,277 words of the Quran in just six months compared to other compatriots who took years to memorise the 114 chapters of the Quran. Kubaisi, originally born at Al Rabita town of Al Anbar province in Iraq, memorised the Quran at Al Zubair Centre for Quran Study. “I started memorising the Quran at the age of 15, and completed it in only six months.  I used to memorise 10 pages of the 604-page Quran every day,” he explained.  While Kubaisi said he used to spend four hours a day in memorising the Quran, there were certain favourite times, particularly from 9am to 11am. “I had had an exceptional ability and sharpness to memorise the Quran at these morning hours.”

Having finished his Grade 6, Kubaisi started studying Shariah sciences which he liked so much, and his father, a school principal, was a great help to him. Talking about his family, Kubaisi said that he and his four brothers have visual impairment.  “Though I was born blind, I normally manage my own business and even go to the Masjid and market on my own.” Showing excellent performance in a local competition in all the ten styles of reciting the Quran, Kubaisi far excelled all other competitors across Iraq. He also came first in the King Abdulaziz International Holy Quran Award. He was then nominated for participation in the Dubai International Holy Quran Award.

Wishing to be the Grand Imam of the Holy Mosque in Makkah, 20-year-old Abdulrahman Mahmoud represents Jordan in the Dubai International Holy Quran Award. “I started memorising the Quran when I was six and finished at nine. I used to memorise one page every day.” Paying tribute to his parents’ support and encouragement, Mahmoud said they keep reminding him of the importance of memorising the Quran in life here and hereafter.

“All my family members were a great help to me. Three elder brothers of my 10 brothers and sisters have also memorised the Quran in full,” he said, noting that he studied the Quran at special centres for teaching the holy book.  Showing exceptional performance in local as well as international contests in Egypt, Tunisia and Saudi Arabia, Mahmoud, who works as an accountant in a restaurant, was nominated for this Award.-Khaleejtimes