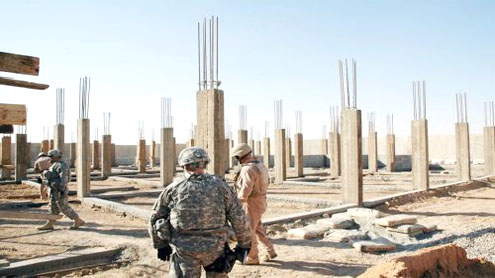 US construction projects in Afghanistan

A U.S. initiative to spend hundreds of millions of dollars on construction projects in Afghanistan, originally pitched as a vital tool in the military campaign against the Taliban, is running so far behind schedule that it will not yield benefits until most U.S. combat forces have departed the country, according to a government inspection report to be released Monday.

The report, by the special inspector general for Afghanistan reconstruction, also concludes that the Afghan government will not have the money or skill to maintain many of the projects, creating an “expectations gap” among the population that could harm overall stabilization efforts.“Implementing projects that the Afghan government is unable to sustain may be counter­productive” to the U.S. counterinsurgency mission, the inspector general wrote. “If goals are set and not achieved, both the U.S. and Afghan governments can lose the populace’s support.”

The study calls into question a fundamental premise of the U.S. strategy to counter the Taliban insurgency — that expensive new roads and power plants can be funded and constructed quickly enough to help turn the tide of war — and it poses a sobering, counterintuitive question for policymakers in Washington: whether the massive influx of American spending in Afghanistan is actually making problems worse.Many U.S. military commanders, diplomats and reconstruction experts have long believed that large infrastructure projects were essential to fixing Iraq and Afghanistan. Now-retired Gen. David H. Petraeus, the former top commander in both wars who is now director of the CIA, used to say that cash was one of his most important weapons.

But the latest report adds new weight to the argument — voiced by independent development specialists and even a few government officials — that the United States attempted to build too much in a country with limited means to assume responsibility for those projects. All U.S. combat forces are expected to be withdrawn from Afghanistan by the end of 2014.Until now, most critiques have asserted only that the massive U.S. foreign assistance program has led to waste and fueled corruption. The new report goes further by suggesting that some projects may ultimately prove detrimental.

In a written response to the report, the U.S. Embassy in Kabul said it was “speculative” for the inspector general to conclude that some of the projects would have adverse effects. The top Pentagon official responsible for Afghanistan called the report premature and insisted that the announcement of the projects, even though they have not been completed, has generated goodwill and excitement among the Afghan people.

The inspector general’s examination focuses on the Afghan Infrastructure Fund, which was authorized by Congress in 2010 in part to prevent the Defense Department from dipping into a discretionary account for military commanders to bankroll large projects. The infrastructure fund was supposed to allow the Defense and State departments to collaboratively plan and pool money for large infrastructure improvements aimed at supporting the U.S. counter­insurgency campaign.