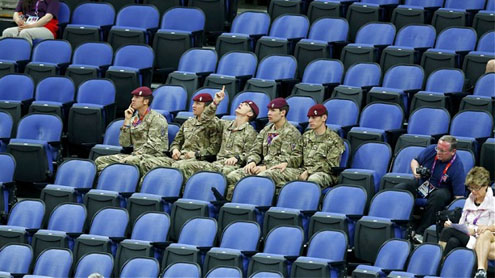 Lord Coe, the chairman of London 2012, was accused of breaking a promise that unsold and unused corporate tickets would be given to the public, while Sir Menzies Campbell, an observer on the board of Games organisers Locog, described the situation as depressing.

Athletes who had been unable to get tickets for their families to watch them compete said it was “absurd” and “ridiculous” that whole blocks of seats remained empty at some venues.Locog insisted that off-duty soldiers, as well as local schoolchildren and teachers, be taken by bus to venues to help fill the gaps, as Lord Coe ordered an urgent investigation into why so many seats have been empty.A survey by The Daily Telegraph found that at least 12,000 seats were unused yesterday, not including football stadiums, where tens of thousands of seats have been unoccupied for some matches.

Popular events such as gymnastics, tennis and swimming had swathes of empty seats despite members of the public being told that they were sold out. While some empty seats were those reserved for dignitaries who did not turn up, others were among 120,000 unsold tickets allocated to foreign countries which have not returned them.Up to 70,000 of those tickets could be simply thrown away, The Daily Telegraph has learnt, because it is not cost-efficient for ticket agencies to return them, while another 50,000 premium tickets are being held back by foreign ticket agencies hoping to make a killing by selling them at grossly inflated prices at the last minute.

Parts of the Aquatic Centre remained empty despite some of the most hotly anticipated swimming events including Rebecca Adlington’s bronze medal in the women’s 400m freestyle and France beating the US and Australia in the 4×100 freestyle relay. In particular, several rows of seats allocated to athletes were not in use.Baroness Doocey, the former Liberal Democrat chairman of the London Assembly, said: “The word for this is fiasco. Seb Coe gave categorical assurances that by 9am each morning Locog would know how many seats would be used and at that point they would give unused ones to local children or charities to fill the seats with cheering spectators.

“I’m absolutely furious about this because they said it couldn’t happen. They need to get off their backsides and sort this out, because it is an absolute disgrace.”She added: “This is becoming a national embarrassment.”Among the athletes who expressed their dismay were an Indian tennis player, Mahesh Bhupathi, who tweeted: “Been trying for 6 hours now to buy my wife a ticket to watch me play tomorrow. Still no luck, and the grounds here feel empty. Absurd!!!”Irish swimmer Barry Murphy tweeted: “Hundreds of empty seats again in the Aquatic Centre. My parents would’ve given an arm and leg to get in.”

Lord Coe insisted the venues were “stuffed to the gunwales” despite the evidence to the contrary, though he admitted there was a problem with accredited officials and dignitaries failing to take up their allocation of seats at some venues.Sir Menzies Campbell, who ran in the 100m for Great Britain at the 1964 Tokyo Olympics, said: “Nothing is more depressing for the competitors than finding a partly-empty stadium.”Reserving seats for a certain number of officials is necessary but surely it’s possible to work out a system of selling seats to members of the public if they remain unoccupied after a certain time.”Jeremy Hunt, the Culture Secretary, insisted that the unused tickets would be made available to members of the public and admitted that the large number of empty seats at events was “very disappointing”.