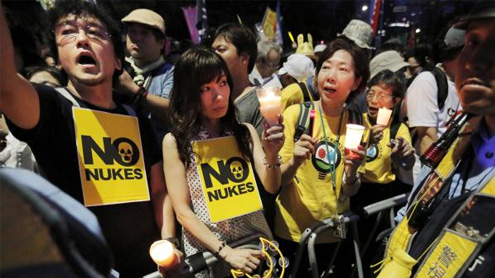 Thousands of demonstrators holding aloft candles and lights formed a human chain around Japan’s parliament on Sunday in a new protest against nuclear power after last year’s Fukushima atomic crisis.

The sea of people illuminated the evening gloom as they surrounded the legislature in Tokyo, the latest development in a snowballing protest movement of the type not seen in sedate Japan for decades. The protesters are demanding that Japan abandon nuclear power and their movement has been galvanised by Prime Minister Yoshihiko Noda’s recent decision to resume using atomic energy after a total shutdown. Organisers put the number of protesters at 200,000, but police told local media that there were between 10,000 and 20,000 people.

With many clad in gas masks and white protective suits similar to those used in decontamination work at the crippled Fukushima plant, the demonstrators earlier took part in a noisy march through the capital to the parliament. To the noise of drumming on yellow barrels emblazoned with atomic waste warning symbols, they chanted “we don’t need nuclear power” and “stop operating nuclear plants”.  “After the Fukushima disaster, I thought that the government and vested interests were telling us lies about nuclear power being safe,” said protester Miho Igarashi, 46, an architect from Ibaraki prefecture south of Fukushima.

“We have to raise our voices against” the danger of atomic power, she told media. The rally is the latest in a string of protests in Japan, which has seen a rising tide of anti-nuclear sentiment since Noda in June ordered the restart of two reactors. Noda defended the move citing looming power shortages after Japan switched off its 50 nuclear reactors — which provided the resource-poor country with a third of its energy — in the wake of the Fukushima disaster.

Weekly demonstrations outside the prime minister’s residence have drawn tens of thousands of people and a rally in west Tokyo earlier this month saw a crowd that organisers claimed was about 170,000-strong.  The march earlier Sunday took place in high temperatures under a blazing sun, and the crowd included families with small children. “I decided to join the protest because nuclear reactors are resuming even though their safety is not guaranteed,” said Sayaka Suzuki, 28, who was with her three-year-old daughter.

The latest rally comes less than a week after a damning government-backed report on last year’s crisis said Japanese officials and Tokyo Electric Power (TEPCO), operator of the crippled Fukushima plant, ignored the risk of an atomic accident because they believed in the “myth of nuclear safety”.  A separate parliamentary report said the worst nuclear accident in a generation was a man-made disaster, marked by a lack of oversight and collusion between TEPCO, the government and regulators.

The giant utility largely cleared itself of blame, saying the size of last year’s earthquake and tsunami was beyond all expectations and could not have reasonably been foreseen. A 9.0-magnitude earthquake and tsunami on March 11, 2011, crippled cooling equipment at the Fukushima Daiichi plant, triggering meltdowns that spewed radioactivity and forced tens of thousands of residents to flee.

The rising anti-nuclear sentiment in Japan has also led to the launch of Greens Japan, a political organisation aiming to field candidates with an environmental agenda in parliamentary elections. “A party that strongly pursues environmental policies is needed,” Akira Miyabe, the group’s 59-year-old deputy head, was quoted by Kyodo News as saying at an inaugural meeting on Saturday.-Khaleejtimes