US bunker-buster bomb ‘ready to go’ 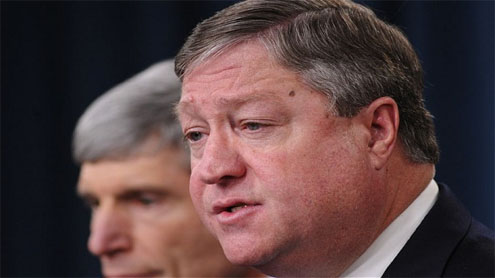 Michael Donley, the US Air Force Secretary, said that the bomb “if it need to go today”, would be available.”We continue to do testing on the bomb to refine its capabilities, and that is ongoing,” he said “We also have the capability to go with existing configuration today.”The endorsement of the Massive Ordnance Penetrator (MOP) – the world’s largest conventional bomb – comes after concerns were raised that the weapon still needed refining if was to be effective against Iran’s deepest installations.

Last February Congress agreed to an “urgent” Pentagon request to divert $81.6m (£52m) into improvements for the 14-ton MOP.The 20ft long, 1ft wide weapon will be delivered by the B2 stealth bomber, is the critical piece of military hardware that underwrites American assurances to Israel that it will neutralise Iran’s nuclear facilities if diplomacy and sanctions fail. Last month talks in Moscow between Iran and six world powers ended in deadlock, raising the risk of a pre-emptive Israeli strike. A follow-up meeting in Istanbul this week also ended without apparent progress.

Barack Obama has repeatedly reassured Israel that the US “has your back”, but it remains unclear if Israel is prepared to wait to the point where Iran’s facilities are placed beyond the reach of its own GBU-28 bunker-busters which weigh just 5,000lbs.Iran’s facilities at Natanz, in the centre of the country, which are buried under 33ft feet of earth and 6ft of concrete and at Fordo, near the holy city of Qom, which are buried in a mountainside, would be the hardest to hit, according to military analysts.

Tensions have been rising steadily in the Gulf, with the US Navy announcing this month that it would deploy a second carrier battle group, led by the USS John C Stennis, to the region some four months ahead of schedule.Iran’s foreign ministry warned last week that the increased presence of US warships was a “real threat” to regional security, while repeating threats to shut down the Straits of Hormuz, an arterial shipping lane which carries 20 per cent of the world’s oil.