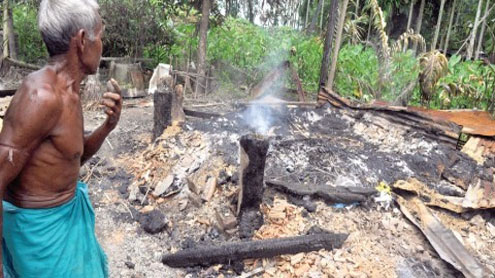 GUWAHATI: Large troop deployments appear to have stemmed an outburst of ethnic violence in northeast India, officials said Thursday, after a week of clashes that left at least 45 people dead.

Authorities in the state of Assam were drawing up plans for some 200,000 displaced villagers, who fled their homes for protection in relief camps, to be escorted back under armed guard. Rival gangs from indigenous Bodo tribes and Muslim settlers have fought each other since last Friday, often beating victims to death with sticks and burning down scores of houses in an eruption of anger over long-running land disputes.

“The situation is returning to normal and we are taking all possible steps to ensure that no fresh outbreak of clashes takes place,” Assam chief minister Tarun Gogoi told AFP.State officials say that about 200,000 people have moved to relief camps, government buildings and schools near their villages to escape the unrest and receive emergency food supplies.

“We shall review the situation and see if we are able to send back people sheltered in relief camps to their homes under tight security,” Hagrama Mohilary, chief of local government body the Bodoland Territorial Council, told AFP by telephone.But some families in the camps, which are protected by soldiers, expressed fears about being attacked by marauding gangs if they return home. “We are not going back unless we are sure there is adequate security in and around our villages,” said Rahimuddin Ali, whose mother was stabbed to death in the violence.

“Some of us have our homes intact, while many homes were set ablaze. Where do they go?” he told local television at one of the relief camps in the worst-hit district of Kokrajhar.Troops have been on patrol across the west of Assam, under orders to “shoot-on-sight” at mobs breaking curfew restrictions. At least 3,000 extra soldiers and paramilitary personnel have been rushed to the region.A statement from the state government on Thursday morning put the death toll at 41 and four more bodies were discovered on roadsides later in the day. Some reports said the outbreak of violence was triggered when two Muslim student leaders were shot and badly injured, leading to revenge attacks on Bodo groups. – PT