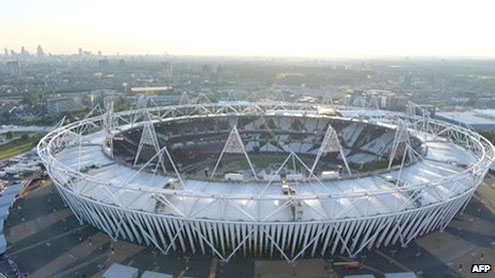 The opening ceremony of the London Olympics is due to take place later after seven years of preparations.

The three-hour spectacle in the Olympic Stadium is expected to be viewed by a global TV audience of a billion people.The final day of the torch relay will see the Olympic flame taken along the Thames on royal rowbarge Gloriana – and then used to light the cauldron that will shine during 16 days of sport.The Games will see the biggest UK peacetime security operation mounted.

Organisers have released a video clip giving a sneak preview of Oscar winner Danny Boyle’s opening ceremony, featuring groups in colourful stage outfits dancing to Tiger Feet by 1970s rock group Mud and cyclists with wings pedalling along to Come Together by the Beatles.Europe’s largest bell will ring inside the stadium at 21:00 BST at the start of the £27m extravaganza, featuring a cast of 10,000 volunteers and said to be a quirky take on British life.Some 15,000 square metres of staging and 12,956 props will be used, and the event will boast a million-watt PA system using more than 500 speakers.

The crowd of about 80,000 will include the Queen and a host of dignitaries and celebrities.As late as Thursday night, Games organisers said that the ceremony had not sold out and tickets in the two highest price categories, costing £2,012 and £1,600 were still available.Earlier, the torch relay will make its way through the maze at Hampton Court, before it travels down the Thames.The final torchbearer of the 70-day relay will be 22-year-old basketball player Amber Charles, who played a key role in London’s winning bid and who will carry the flame in front of City Hall and Tower Bridge at approximately 12:45 BST.

The relay ends late in the evening with the lighting of the cauldron during the opening ceremony but the identity of the person who will take on the honour remains a mystery.BBC sports editor David Bond said the millions of people who have lined the UK’s streets to witness the passing of the torch relay reflect an enthusiasm and pride in the Games which has been growing over the last few weeks.

He said Games organisers have not experienced the sort of problems so many other host cities have endured but could find themselves under the spotlight if the transport network fails or if problems with venue security emerges.The Queen and Prince Philip will host a Buckingham Palace reception for heads of state and government and an opening ceremony celebration concert featuring Snow Patrol, Stereophonics, Duran Duran and Paolo Nutini will be held in Hyde Park.And the sporting action, which officially began on Wednesday with the women’s football competition, continues with archery at Lord’s cricket ground. – BBC