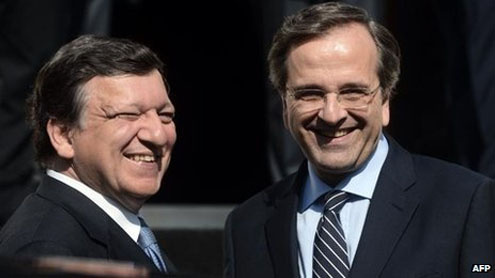 Greek PM Antonis Samaras is set to meet international creditors to try to persuade them that Athens deserves its final instalment of bailout money.

The EU, IMF and European Central Bank are due to examine Greece’s finances before deciding whether to hand over 31.5bn euros ($38bn; £24.5bn).Without the funds, Greece would face bankruptcy and probably leave the euro.Mr Samaras said on Thursday that the government would do all it could to get Greece back on track.The government is preparing a two-year, 11.7bn euro cost-cutting plan, reportedly through further reductions in pension, benefits and healthcare spending.

After talks with European Commission President Jose Manuel Barroso, the prime minister said the three-party coalition had decided to press ahead with measures such as privatisation and changes to the public sector.Mr Barroso said he had been assured that the government would speed up key structural reforms such as tackling tax evasion. But he said the main issue was in the delivery of results.”Words are not enough. Actions are much more important,” he said.

The BBC’s Mark Lowen in Athens says Mr Samaras will attempt to put minds at rest when he meets the three international lenders, known as the troika.But the troika’s patience is wearing thin, our correspondent says, as Greece is lagging behind schedule in reducing its deficit.Greece held two general elections in May and June as the country’s politicians struggled to form a government.But after two international bailouts worth 100bn euros and then 130bn euros, there is widespread scepticism that Athens will be able to meet the commitments made to secure the agreements.On Tuesday, Mr Samaras declared that the country’s economy was expected to contract by 7% in 2012, more than the 5% previously forecast by the Greek central bank. – BBC

Cuban President Raul Castro ‘willing to talk to US’

Cuban President Raul Castro 'willing to talk to US'