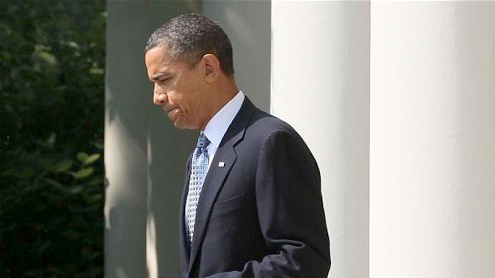 Barack Obama has called for tighter background checks on US gun-owners, making his first foray into the politically charged gun control debate since the Colorado shooting.

He also questioned whether the widely coveted US second amendment “right to bear arms” should include assault rifles like the semi-automatic AR-15 weapon with 100-round drum magazine used by the Denver gunman. “I believe that a lot of gun owners would agree that AK-47s belong in the hands of soldiers, not in the hands of criminals. That they belong on the battlefield of war, not on the streets of our cities,” Mr Obama told a civil-rights group in New Orleans.

The remarks come less than a week after the shootings and follow calls from prominent gun control advocates, including the New York mayor Michael Bloomberg, for the two presidential candidates to have an open an honest debate over guns.  Both Mr Obama and his opponent Mitt Romney have supported curbs on assault rifles in the past, but have been wary of challenging national public opinion polls that show waning support for tougher gun laws in recent years.

“Every day and a half the number of young people we lose to violence is about the same as the number of people we lost in that movie theatre,” Mr Obama added in remarks to the National Urban League.  But while Mr Obama pledged to “arrive at a consensus around violence reduction” analysts say there is little prospect of major change in US gun laws, a subject which has proved such a divisive political issue in the past. Democrats remain scarred by the memory of heavy midterm election defeats in 1994 that followed hard on the heels of President Bill Clinton forcing through a now-lapsed 10-year ban on assault weapons, provoking a furious backlash from gun lobby groups.

Mitt Romney, the Republican presidential hopeful whose party grass-roots are staunch defenders of the right to bear arms, said on his visit to London that tougher legislation was not the way to address America’s epidemic of gun crime. “I don’t happen to believe that America needs new gun laws,” he told NBC news, “A lot of what this … young man did was clearly against the law. But the fact that it was against the law did not prevent it from happening,” he said. Mr Romney added: “We can sometimes hope that just changing the law will make all bad things go away. It won’t. Changing the heart of the American people may well be what’s essential, to improve the lots of the American people.”

The National Rifle Association, the hugely powerful pro-gun lobby group, has so far refused to join the debate on gun controls since the Denver massacre. “The NRA believes that now is the time for families to grieve and for the community to heal,” said Andrew Arulanandam, the group’s director of public affairs. In Denver, as the first funerals and memorial services for 12 victims of last week’s cinema shootings were held, reports have emerged of several of those wounded in the attacks fear they will be unable to meet their medical bills.

The family of a 23-year-old aspiring comic, Caleb Medley, who is in critical condition with a head wound and whose wife Katie, gave birth to their first child on Tuesday, announced it was courting online donations. Family and friends said they had set a goal of raising $500,000 to cover his hospital bills and other expenses and were more than halfway there. -Telegraph