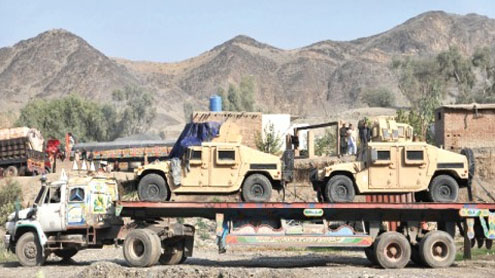 PESHAWAR: The flow of trucks supplying NATO troops in Afghanistan has surged at a key Pakistan border crossing in recent days, officials said Wednesday, despite a deadly attack and Islamist protests.

Few containers had trickled across the border since Islamabad reopened the routes three weeks ago, but officials at Torkham, in Pakistan’s northwestern tribal district of Khyber, said more than 100 had crossed in the last two days. Islamabad closed its land routes to NATO convoys in November following botched US air strikes that killed 24 Pakistani soldiers, but reopened them on July 3 after Washington said sorry for the deaths.

“More than a 100 trucks have crossed Torkham border in the past two days, a total of 140 have so far crossed into Afghanistan,” Obaidullah Khan, a customs official at Torkham, told AFP. Before the blockade, around 150 trucks crossed into Afghanistan each day at Torkham — the closest border crossing to Kabul — and officials say the flow will rise to up to 300 a day. News of the increase came a day after gunmen attacked NATO supply trucks near a market in Jamrud town in Khyber, killing a driver. There was no immediate claim of responsibility for Tuesday’s attack but Pakistani Taliban have threatened to attack NATO trucks and kill their drivers. – PT