At 50, Havaianas flip-flops are symbol of Brazil 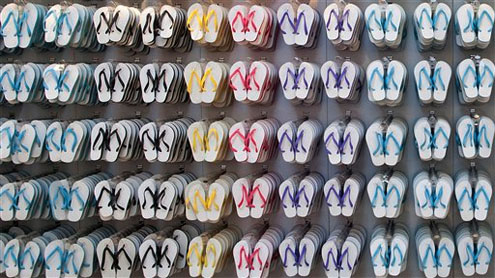 flip-flops are symbol of Brazil

RIO DE JANEIRO: Brazil’s well-heeled socialites swear by them. Legions of slum-dwellers from the country’s hillside “favelas” don them almost every day.

Minimum wage earners behind juice bar counters use them, as do newly minted millionaires and, alarmingly, construction workers.n Brazil, literally everyone wears Havaianas, the now world-famous brand of rubber and plastic flip-flops that’s celebrating its 50th birthday this year.Since their 1962 introduction, Havaianas have joined soccer and samba as one of the great social equalizers in this country, among the world’s most stratified societies.Initially the workaday staples of the Brazilian poor, Havaianas have transcended both their modest origins and the country’s borders to become an object of desire the world over, sold at Bloomingdale’s and Neiman Marcus and coveted by Hollywood A-listers, European royals and suburban princesses from Seattle to Seoul.

Not only have they become all but de rigeur in poolside Miami and beachfront Cancun, Havaianas now have a way of cropping up where you least expect them, from Paris’ rarified haute couture catwalks to the red carpet at the Oscars.The iconic flip-flops now rival uber-model Gisele Bundchen for the title of Brazil’s most famous export. And though the word “havaianas” means Hawaiian in Portuguese, the flip-flops have come to be something of a symbol for Brazil itself.”They’re cool, colorful, laid back and chic,” said Brazilian-born fashion consultant Abraao Ferreira. “They’re the quintessence of everything that people find appealing about Brazil.”

The numbers speak to that enduring popularity.Last year, 210 million pairs of Havaianas were sold worldwide. Even with 15 percent of total production exported to some 80 countries, enough of the sandals were sold in 2011 for nearly every man, woman and child in Brazil.Legend has it that Havaianas’ simple wishbone between-the-toe design was inspired by Japanese “zori” sandals, the traditional straw-bottomed footwear worn by geishas.

“It’s true that some executives from (parent company) Alpargatas took a trip to Japan before the launch,” in 1962, said Rui Porto, a longtime company executive who now works as a media consultant for the brand. “But the origins of this style of sandal date back to the dawn of time, to roughly the same era as the invention of the wheel.”In fact, that’s why there’s no patent on them,” Porto said.

Still, patent or not, Havaianas has kept the formula behind its squishy rubber soles a tightly guarded secret. Since most of its direct competitors make cheaper, plastic-soled flip-flops, Havaianas’ aerated rubber soles are seen as key to the brand’s success and their manufacturing process is kept under strict wraps.Beyond acknowledging they’re made from a mixture of domestic and imported rubber that shrinks and hardens with extended wear, Porto declined to provide any details about the secret soles.

In the beginning, Havaianas came in a Spartan palette, their white soles paired with either sky blue, black or yellow straps. Sold in popular street markets, they quickly became such a basic for the poor here that they were included on the list of basic necessities such as rice and beans that the government used to calculate cost-of-living increases.”Havaianas were almost synonymous with poverty,” said Porto. “They were sold like a commodity, with no investment in design or marketing or innovation, and the whole business model hinged upon selling increasing numbers of pairs in order to drive production costs down.”

By the early 1990s, with domestic competitors beginning to eat away at Havaianas’ market share, label executives made a bold, 180-degree shift in strategy. Their plan, aimed at rebranding Havaianas as a fashion accessory, would prove so wildly successful that it has since become a business school case study in marketing.The label looked to inventive wearers who had long been transforming their bicolor sandals into single color ones by flipping the white-topped sole over. In 1994, Havaianas introduced a new line of one-shade sandals in black, royal blue, pink and purple.

Suddenly, middle- and upper-class Brazilians who either wouldn’t have been caught dead in Havaianas or donned them exclusively for the short trek from their beachfront apartments to the sand, were snatching them up in multiple shades for all occasions.Ladies who lunch from Rio’s tony Leblon neighborhood wear them to all-important visits to the hairdresser or even out on dates. Private school scions use them to mark the goal box during beach soccer matches. Moneyed businessmen wear them while walking the dog or out to a high-end “churrascaria” barbecue.

Havaianas now come in an ever-changing rainbow of 23 shades, some emblazoned with eye-popping prints on the soles or rubber appliques on the straps. At the brand’s concept store on Rua Oscar Freire, Sao Paulo’s answer to 5th Avenue in New York, Havaianas devotees can get bespoke sandals made to their color specifications or emblazoned with their initials.

Swanky Brazilian jewelry label H. Stern has crafted a limited edition of six pairs bedazzled with diamonds and glinting with gold. Designer Gustavo Lins, a Brazilian who’s among the elite cadre of Paris’ haute couture purveyors, sent out a collection of made-to-measure garments paired with Havaianas. The brand has also collaborated with Missoni to create a line of flip-flops emblazoned with the Milan-based luxury label’s hallmark zigzags.

While prices for the basic, no-frills models have remained low, retailing in Brazil for just $5, a premium off-the-shelf pair goes for up to $28 here. In the U.S. most models are in the $20-$30 range.Brazilian-born former model and socialite Andrea Dellal keeps her dazzling Rio apartment stocked with Havaianas in every conceivable size and color.”I keep baskets full of them in all the bedrooms, and my guests and my children and their friends help themselves,” said Dellal.

She said she had vivid memories of wearing Havaianas to the beach as a child. Now she wears them everywhere.”I wear them with my Dolce & Gabbana dresses during the day because they’re easy to run around in and sometimes I wear them at night with long dresses. I love the look,” said Dellal, whose other footwear of choice includes vertiginous heels by Manolo Blahnik and daughter Charlotte, who’s behind the high-end London shoe label Charlotte Olympia.Still, despite, or perhaps because of, their adoption by the elite, Havaianas continue to appeal to their original customers at the bottom of Brazil’s class hierarchy.

“The popular classes are buying more Havaianas than ever,” said consultant Porto. “Poor people have the right to be fashionable too, and people in this group tend to save up for different models and lots of colors.”They see their bosses wearing Havaianas, they see TV stars wearing them and even foreign movie stars in them, and they feel proud to wear them.”A single factory in the northeastern state of Paraiba churns out all those flip-flops, but a new site is under construction in central Minas Gerais state to keep up with demand.

The brand is looking to grow in other emerging countries, such as China and India, but its core will remain unapologetically Brazilian, Porto said.For working-class Brazilians, who were the reason for the brand’s initial success, anything less would be unthinkable.”I have been wearing Havaianas ever since I can remember,” said Vania Lucia Ribeiro, a 32-year-old maid who lives in a distant Rio de Janeiro suburb. “I buy them for my children and I buy them for myself. I can’t imagine living without them.”