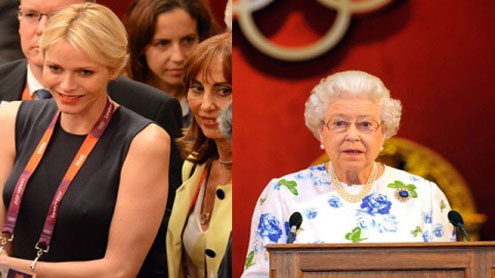 VIPs flock to London for ceremony

LONDON: Thousands of VIPs including some 120 national leaders will jet into London for Friday’s Olympic opening ceremony, with guests ranging from Angelina Jolie and Michelle Obama to the king of Swaziland.

The expected record number of heads of state and government will watch the Olympic cauldron lit by a mystery personality in a £27 million ($42 million, 35 million euros) extravaganza of music, dancing and pyrotechnics, amid a flurry of A-list parties in the British capital. Germany’s Angela Merkel and Japanese Prime Minister Yoshihiko Noda are among the leaders set to attend what will be a suitably British and eccentric show, featuring live sheep and dancing surgeons from the National Health Service.

Britain’s 86-year-old monarch Queen Elizabeth II will officially open the Games at the ceremony, whose exact contents are a secret — but which is also said to include a scene in which magical fictional nanny Mary Poppins vanquishes Harry Potter villain Lord Voldemort. First Lady Michelle Obama will head the US delegation, and while there are no plans for her husband President Barack Obama to attend, his electoral rival Mitt Romney will be in the crowd wooing foreign leaders ahead of November’s election.

Britain’s Prince William and his wife Catherine, credited with breathing new life into the country’s monarchy, will appear along with a flock of European royals including Prince Albert of Monaco. Russia’s delegation will be led by Prime Minister Dmitry Medvedev, while strongman President Vladimir Putin has indicated he may fly in later purely to watch the judo, in which he is himself a black belt. British football legend David Beckham is expected to appear at the ceremony despite not being selected for Team GB — his non-selection drew public anger.

The contingent of heads of state and government, which the Foreign Office says will peak at about 120 for the ceremony, outstrips about 80 who attended the Beijing ceremony in 2008 and about half that number in Athens four years earlier. They will also be invited to a reception at Buckingham Palace beforehand. But even glitzier will be the series of celebrity parties taking place around the fringes of the Games, above all a charity gala at the Victoria and Albert Museum Wednesday in aid of Sports for Peace, honouring boxing great Muhammad Ali.

Hollywood mega-couple Angelina Jolie and Brad Pitt are helping host the soiree, leading it to be dubbed “Brangelina’s party” by British newspapers agog with the influx of stars. “Royalty meets Hollywood as star-studded Games party season starts,” gushed the London Evening Standard on Monday. According to the Times newspaper, that party will also feature film actress Catherine Zeta Jones, racing driver Lewis Hamilton and Ukrainian boxing duo the Klitschko brothers. But the food was to be down-to-earth, including the British classic fish and chips.

The watch brand Omega will host a series of “secret” parties during the Games, with invitees including Australian actress Nicole Kidman, a face of the brand, and US swimming multiple gold medal-winner Michael Phelps. Several super-yachts, favoured by tycoons, are meanwhile moored off the Canary Wharf business district. There will, however, be notable absences as the Games begin — not least leaders such as Syria’s Bashar al-Assad, who along with Zimbabwe’s Robert Mugabe and Alexander Lukashenko of Belarus is subject to a European travel ban.

Other Syrians, including Olympic committee chief General Mowaffak Joumaa, are staying away after London said it would deny entry to people shown to be linked to rights abuses. But Syria’s 10-strong Games team will still compete despite the raging civil war there. A visit from Iranian President Mahmoud Ahmadinejad looks in doubt, after he said he believed Britain had a “problem” with his presence. His country is involved in a high-stakes nuclear standoff with the West. But with the International Olympic Committee maintaining a non-political stance, there will be few exclusions.Swazi King Mswati III is set to attend despite protests against his presence at May celebrations for Queen Elizabeth II’s jubilee by compatriots who say he leads a lavish lifestyle at the expense of his impoverished subjects. – Nation