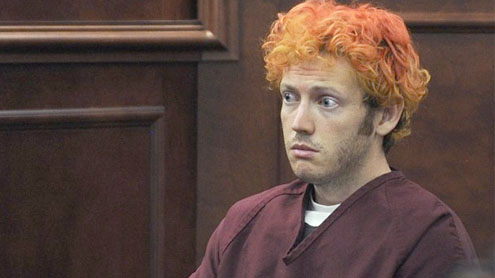 CENTENNIAL, Colo: James Holmes made his first public appearance as an alleged killer on Monday, shambling into a Colorado courtroom with a bearing more like that of a teenage delinquent than the comic-book supervillain he reportedly fancied himself to be.

Holmes, 24, did not speak during his brief appearance. A judge ordered him held without bond in the shooting rampage early Friday in Aurora, Colo., that killed 12 and wounded 58.But Monday provided a first look at the man who allegedly opened fire in a crowded movie theater while wearing body armor and a gas mask that hid his face. Holmes’s hair was dyed an uneven and amateurish red, darkest at the crown of his head and then fading to pink, orange, yellow and finally to the brown of his sideburns.

Holmes walked just a few feet into the courtroom, sitting next to a defense lawyer in a jury-box seat, as far as possible from the family members of victims who were sitting in the gallery. Five sheriff’s deputies stood in the aisle, in case they tried anything. Two deputies stood near Holmes, in case he did.

Judge William B. Sylvester read through the boilerplate beginnings of a big trial: orders to stay away from the shooting victims, warnings about Holmes’s right to remain silent. The suspect looked straight ahead. He looked down. He let his eyelids sink, and his shoulders; more than anything, Holmes looked lethargic.He has not yet been officially charged, and Monday’s appearance, called an advisement, precedes a formal arraignment at the Arapahoe County Justice Center. Holmes is refusing to cooperate with investigators trying to learn what motivated the attack.

“He’s not talking to us,” Aurora Police Chief Dan Oates told reporters. Holmes has been assigned two public defenders, who have not commented publicly.Carol Chambers, the district attorney for Arapahoe and several other counties, told reporters after the hearing that she had no information about whether Holmes was on medication during his appearance and that she could not explain his lack of emotion and his seemingly dazed look as the hearing unfolded.

Asked whether she anticipated an insanity defense, Chambers replied, “I don’t know that we’re anticipating anything right now.” She said Holmes is being held in isolation “for his safety.”She said a decision on whether to pursue the death penalty in the case will be made after authorities consult with victims and their families.“They will want to have, and we will want to get, their input before we make any kind of a decision on that,” Chambers said. She added that a death-penalty decision has to be made within 60 days after the arraignment.

At Monday’s hearing, Homes gave “a bizarre performance,” said Joseph E. diGenova, a former U.S. attorney for the District. “His entire demeanor was bizarre. Is this guy acting, or is this real? Is he psychotic? Is he seriously ill?“There is no doubt he is a very disturbed person,” diGenova said. “But whether he is technically mentally ill for insanity-defense purposes remains to be seen.” – WP